The Cannes Film Festival has given its top prize, the Palme d’Or, to a female director for only the second time in its seventy four year history. 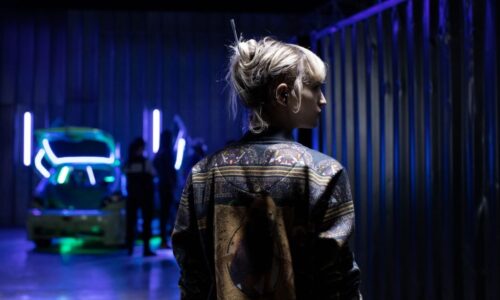 One year and two months late, the South Korean social satire Parasite has been succeeded by the French director Julia Ducournau’s horror, Titane, described by some critics as one of the wildest, sexiest and most violent films ever shown at the world’s most prestigious film festival. It’s the follow-up to Ducournau’s acclaimed cannibal horror Raw.

“It’s the first film ever here a Cadillac impregnated a woman. That blew my mind!” laughed the President of the jury, Spike Lee, who accidentally revealed the winner at the start of the ceremony. “That’s genius and craziness together,” he concluded.

The film tells the story of a female killer who has sex with cars.

The other awards, announced at the appropriate point in the ceremony, saw the American actor Caleb Landry Jones honoured for his role in Nitram, about Australia’s worst mass shooting, in which 35 died in Port Arthur in 1995. The film was received better by the Cannes jury than in director Justin Kurzel’s native Australia.

A little-known Norwegian, Renate Reinsve, was named the best actress for Worst Person In The World.

The runner-up prize, the Grand Prix, was also shared, by another previous Palme d’Or winner. Iran’s Asghar Farhadi’s A Hero was honoured alongside Juho Kuosmanen’s Compartment No.6.

At the end of the ceremony, Lee – who nominally led the jury for the second successive year after last year’s festival was cancelled because of the pandemic – apologised for “messing up” at the start – before messing up a second time, by announcing the winner again, rather than the actress Sharon Stone, who was meant to revealing the top prize.

“This evening has been perfect because it’s been imperfect,” laughed Ducournau, as she became only the second woman – after Jane Campion in 1993 – to accept the Palme d’Or.

The actress Tilda Swinton, who appeared in five films in the festival’s official selection, said her proudest moment was receiving the tongue-in-cheek Palme Dog award, on behalf of her three spaniels – her co-stars in The Souvenir Part 2. “This is the prize to get,” she joked, as she tied the red collar prize around her neck.

At a separate ceremony, held last night, another set of awards were handed out for the Un Certain Regard strand, which tends to programme smaller, more art-house features. It’s top prize went to Unclenching the Fists by Kira Kovalenko.

Having been delayed from its usual May slot, in the hope that the pandemic might have receded, this year’s festival went ahead with less partying and regular Covid testing for the thousands of industry insiders and journalists in attendance.

And here is the full list of prize winners across the main competition strands:

CAMERA D’OR (for best first film at the festival)