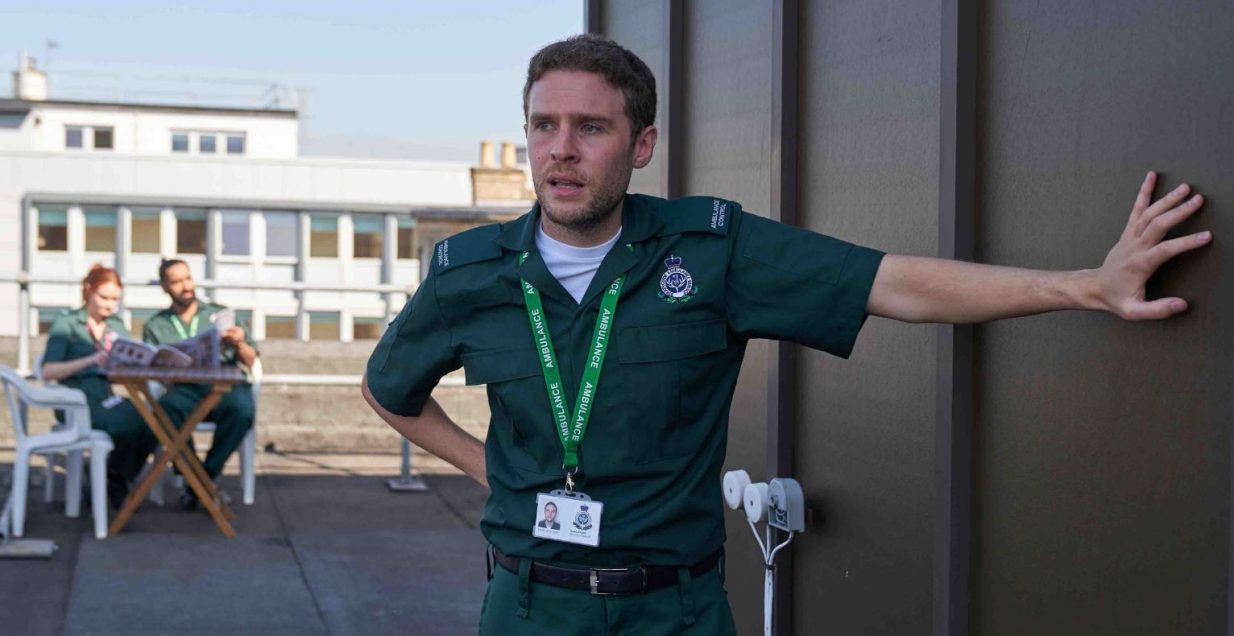 Gabe (Iain De Caestecker) takes the calls in the Strathclyde ambulance control room. One day, a desperate woman screams that she’s just killed her abusive boyfriend – and during the conversation, she stops as she realises she recognises his voice. “Gabo? Is that you?”

He realises that it’s his childhood sweetheart Sam (Joanna Vanderham). What has she done? He arranges to meet her secretly, without raising the suspicions of his colleagues, and she begs him to help – can he move the van where she’s hidden the body?

Seeing his desperate old flame, he agrees to help her, but a colleague Anthony (Daniel Portman) finds out what he’s done. He agrees to keep quiet about it, as long as Gabe delivers a package for him.

What has Gabe got himself involved with? Making deliveries for the mob so that no-one finds out he’s been hiding a murder victim? And all with the police everywhere you look.

This three-part BBC drama gets off to a tense start, as we’re introduced to a happy-go-lucky young man, going about his every-day life in a high pressure job.

We see that he always just wants to do the right thing – we learn that he has a difficult relationship with his father – and through flashbacks, it becomes clear that he had an intense childhood friendship with Sam.

There is rather a lot of flashback – and we do see the same bits over and over again; at least once each episode, we’re reminded that he once told her that if anything ever went wrong for her, he’d “sort it” for her. We wonder what is the hold she has over him and sit through flashback after flashback, wondering if we’ll ever find out.

Each time the plot ratchets up the tension, viewers will find themselves either floored with shock or rolling their eyes, but as the narrative continues to unfurl, Gabe finds himself in deeper and deeper trouble – further out of his depth and letting his misplaced emotions lead him into greater peril. His good nature sees him drawn inadvertently into the criminal underworld.

So far so good. And up until the end of episode two, it is good.

But come episode three, the plot spins so wildly out of control, twisting more than Chubby Checker as all reason slowly begins to vanish. Surely he’d have looked there. Surely they’d have done this. Surely he wouldn’t have done that. Nothing feels authentic. Credulity is stretched beyond belief and while some answers are provided, they’re not usually the ones you’re seeking. Most of the twist don’t really stand up to much scrutiny, but a couple do hit the mark.

Iain De Caestecker is likeable enough in the lead although it’s hard to root for someone who keeps making decisions that no sensible person would. Too many of the other characters either act inconsistently or follow the typical thriller traits of a femme fatale or a grimacing villain.

It’s a shame that what starts as an intriguing and compelling thriller rapidly unravels into an incoherent mess. The more it tries to engage the audience, the more it loses its way. In its favour, it’s only three episodes long, which makes it more digestible than many comparable shows and means that there’s less to lose by sticking with it, once you’ve committed.