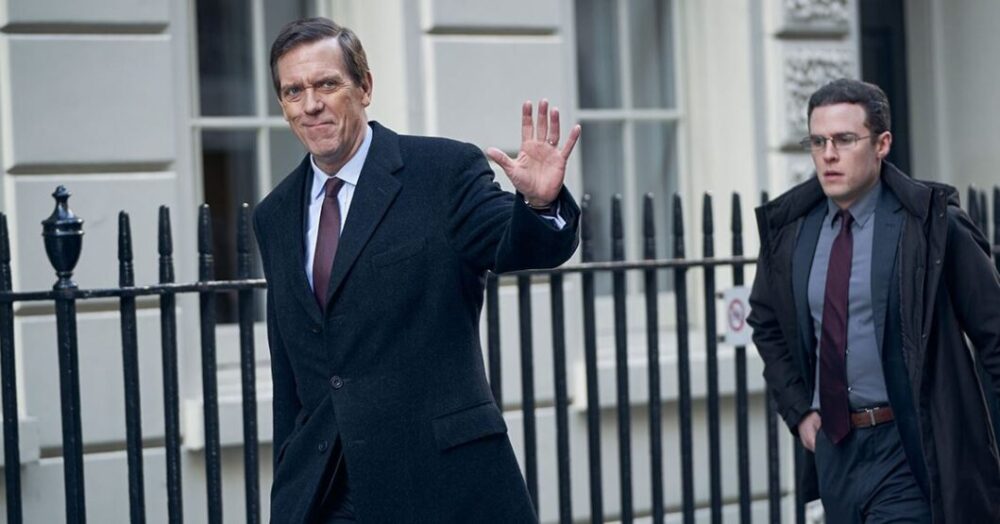 The Transport Minister Peter Laurence (Hugh Laurie) has just won a libel case against a newspaper after the journalist, Charmian Pepper (Sarah Greene), changed her story in court.

She loses her job, but she’s determined to keep investigating, to find another source who can corroborate her story and restore her reputation.

His own reputation now intact, Peter Laurence is promoted to the cabinet by the Prime Minister Dawn Ellison (Helen McGrory) and without consulting her, announces a radical, more liberal approach to prisons policy.

But while he’s climbing further up the political machine – becoming the popular face of the Conservative party – his own family is falling apart – and people within his own team are leaking secrets like a sieve, to try to bring him back down to earth with a bump.

Political scandal, intrigue, backroom deals and betrayal are nothing new to the screen – big or small.

But David Hare’s four-part BBC drama somehow lacks the focus or excitement of many of its stable-mates.

Dodgy money exchanges hands – people who know about it die – can anything be traced back to the politicians at the top – or the advisers below? So far, it has potential.

In Hare’s telling of the story, the real puppet-masters are the party apparatchiks, who don’t really care who’s sitting in the middle of the cabinet table – prime ministers are interchangeable to them, as long as the policy suits their friends. Still has potential.

While all this is fascinating enough, this drama concentrates on the ministers in the lime-light and their special advisers, but almost skims over the figures at the heart of the darkness. Whatever skeletons Peter Laurence has in his closet, they’re nothing compared with the implied menace of shadowy figures using him as their latest pawn.

Hugh Laurie excels as the ambitious minister with a history of affairs that his wife (Saskia Reeves) – back in the constituency home – has always overlooked or pretended didn’t exist. Despite the way she’s been treated, she’s always been there for him when it mattered, but even she has her limits.

There are a lot of neat twists and turns and much of the political plotting is fascinating – perhaps even enlightening – but too much of what’s going on doesn’t ring true or feel coherent.

Everything about the plot suggests that we’re meant to hate this vile, self-serving, philandering politician – but whether it’s through bad writing or Laurie’s fine performance outshining those of everyone who’s up against him, at every turn, we want him to get away with whatever it is he’s done and get frustrated if it looks like anyone might get in the way of those worthy prison reforms.

The minister certainly hasn’t always behaved as you might want your politicians to behave, but he’s not scared to speak truth to power and he genuinely seems to be in politics to make positive change. And when he finds out that he has an illegitimate daughter he never knew about, rather than trying to silence her, as you’d expect from the kind of power-hungry politician he’s being painted as, he embraces her – and not, it seems, as a cynical attempt to win support.

His dealings with everyone from his daughters and his mistress to his special advisers and civil servants, while often brusque, seem generally fair – his wife is the only person who really earns our sympathy.

Laurence is presented more as a misunderstood liberal who’s made a mistake or two in both his personal and professional lives – but he seems to have a good heart, while those who are trying to bring him down seem to be the ones with more questionable motives.

If it’s about all of them, it’s very uneven and feels more like a taster menu than a satisfying banquet – and if the main narrative is meant to be the latter in that list, Peter Laurence doesn’t really seem to be doing much kicking? All the political shenanigans are going on below, beside or above him, while he’s just trying to improve prisons and fix his relationship with his daughters – old and new.

Hugh Laurie was born to play a ambitious, scandal-hit minister, but this is perhaps not the vehicle he’s been waiting for.

There are too many characters – too many red herrings – too many blind alleys that lead the narrative astray. Perhaps there is a fizzing three-part drama buried in these four episodes – but by trying to squeeze in too much, it seems to have diluted what’s there and left a rather bland taste in your mouth.