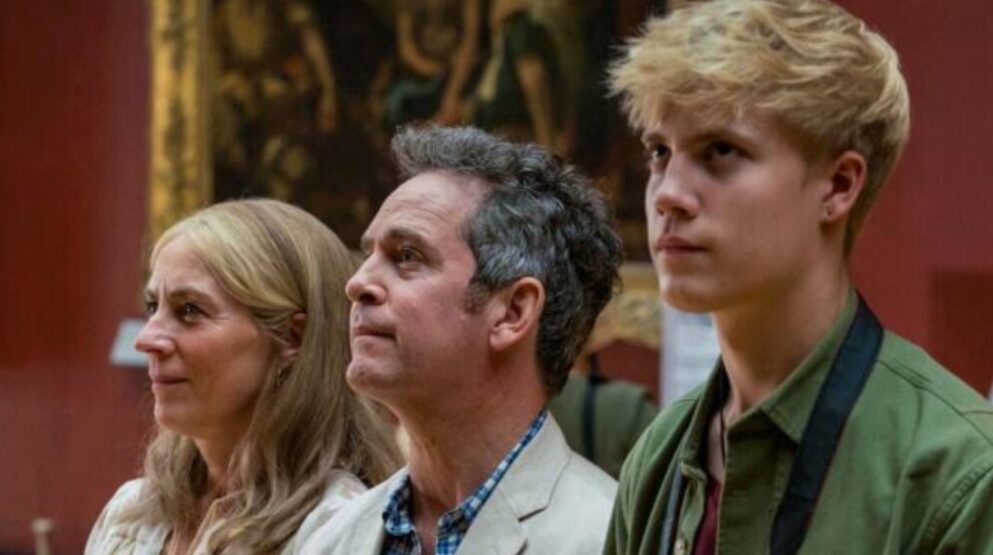 Just as Douglas (Tom Hollander) is preparing to take his wife Connie (Saskia Reeves) and teenaged son Albie (Tom Taylor) on an EU-wide holiday of a lifetime, Connie breaks the news that she’s leaving him.

They decide to go on the “grand tour” anyway, to make some good memories before going their separate ways, but Douglas is determined to use the trip to win back Connie and to rebuild his difficult relationship with Albie.

Intercut with flashbacks of the earlier years of their romance, this 4-part gently comic drama takes the family to France, Italy, Spain and beyond – as they explore the individual relationships between husband, wife and son – learning, variously, to live together, and apart.

Gina Bramhill’s free-spirit doesn’t evolve as naturally into Saskia Reeves’ Connie, who seems to be able to turn on her emotions like a tap in a way that it’s hardly unsurprising that Douglas doesn’t really know where he stands, from one scene to the next.

But with time to think about his life, Douglas realises that the only thing that’s more important to him than his marriage is his relationship with his son, and when Albie runs off, it’s Douglas’ efforts to reconnect with him – both literally and figuratively – that produce the most profound, funny, satisfying – and most importantly, real – moments.

Some scenes suffer from dramatic short-hand with a few too many cliches to nudge along the plot – but Hollander, in particular, is always watchable – whether you think like him or feel that he’s always wrong.

Seeing it all play out against the backdrop of some of Europe’s most glorious holiday-spots is an added bonus that will remind many viewers of the good old days when they could hop on a train or a plane and not have to worry about self-isolating on their return.

The first episode is an effective introduction to the story, while episode two is somewhat thrown off the rails by what appears to be a completely inconsistent response by Connie – although perhaps this, like the recent Normal People, is one of those occasions where male and female viewers might see things differently.

For episode three, the genre flips more towards a comedy-chase, before the fourth episode brings things to a satisfying conclusion – nearly.

If the mini-series – and David Nicholls’ novel on which it was based – ended when Albie was deposited safely at university, it would have felt right – if not addressing the future of Douglas and Connie. But what happens next, again, feels inconsistent with what has gone before, leaving you wondering whether there was actually any point in the four hours of perfectly entertaining TV you’ve been watching in between.