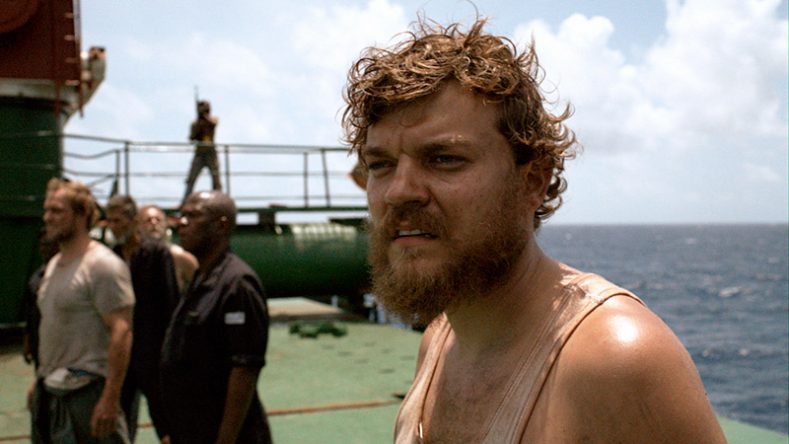 The Danish cargo ship MV Rozen is on its way to Mumbai when it’s boarded by a team of Somali pirates.

They demand $15 million dollars for the safe return of the seven-strong international crew, including the Danish chef Mikkel (Pilou Asbæk).

Although the managing director of the shipping firm, Peter (Søren Malling), calls in Connor (Gary Skjoldmose Porter), an expert in hostage negotiations, he insists on doing all the talking himself. His hard-nosed bargaining creates tension from the outset, when his initial offer is for just $250,000.

He finds himself up against Omar (Abdihakin Asgar), who insists he’s only a translator and not a pirate and gets angry if anyone suggests otherwise.

As the weeks go by, the resolve of both sides is worn down, as the numbers gradually approach a midway point, with food running low, sanitary conditions deteriorating and hope fading that the group will ever get home alive.

Until now, Tobias Lindholm has been best known for writing Thomas Vinterberg’s The Hunt and the political TV drama Borgen, but now he’s getting known internationally as a director, and while not as strong as his previous work, A Hijacking is a fitting calling card.

A Negotiation might have been a more precise title, as this film is all about the talking, rather than the action – the hijacking itself happens while we’re busy watching Peter in a business meeting. But it’s seeing much of the plot unfold from just one side or the other that helps to ratchet up the tension; Lindholm sometimes shows both sides, but often, we see Peter shouting numbers at the pirates or making demands of them, leaving us just as much in the dark as he is about how his remarks will go down. The claustrophobic surroundings of the men on board the ship is also suitably evocative.

Lindholm effectively knocks the bold, supercilious boss down to size, as his initial insistence that the hostages are worth more to the pirates alive than dead gives way to a sense of dread that killing a hostage could increase the value of those who are left.

As he struggles to deal with the psychological tactics of the negotiators, Peter starts coming under pressure to resolve the situation from his board of directors, and the relatives of the men on board. The men themselves look to Mikkel for guidance, as he tries to build a relationship with as many of his captors as possible. Engaging as he is as the protagonist, concentrating so much on the cook and so little on the rest of the hostages does feel somewhat uneven.

With the negotiations going on for months, you wonder why the Danish government isn’t involved in the negotiations – you’d have expected a military solution, to show the pirates that hijacking for ransom doesn’t work, but while that might have been a more realistic plot, it was not the film that Lindholm was aiming for – and would certainly have cost more.

This is not a film that allows much room for character development or plot twists and the way it jumps from one month to another can feel a bit clumsy, but it’s an efficient thriller that knows how to crank up the tension when it needs to, even though from time to time, it ventures a little closer to formula than it should.