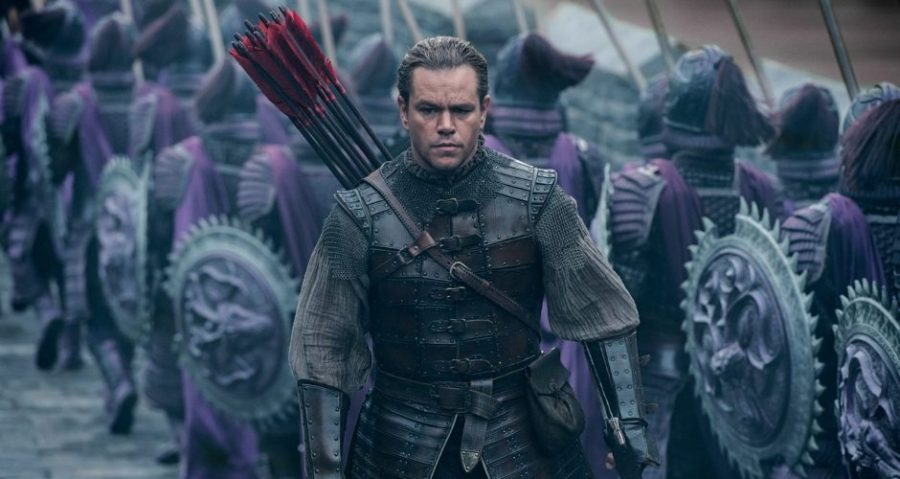 During the Song Dynasty, about a thousand years ago, there are only two survivors when a group of western traders, seeking gunpowder, are accosted by a gang of bandits, not far from China’s Great Wall.

William (Matt Damon) and Tovar (Pedro Pascal) make it to the Wall, where they’re detained by a mysterious band of warriors, known as the Nameless Order, whose job it is to protect the kingdom from hoards of fearsome beasts, the legendary Tao Tie, that have attacked every sixty years for the past two millennia.

During an unexpected attack on the wall by the beasts, the pair’s fighting prowess earns them their freedom, but while Tovar just wants to steal some gunpowder and flee, William decides to stay and help Commander Lin (Jing Tian) and her legions of soldiers to defeat the Tao Tie and protect the people.

For a while now, we’ve been talking about Hollywood’s efforts to break into the exploding Chinese film market and nothing ticks all the boxes like this, the first major production from one of Hollywood’s biggest firms, Legendary Entertainment, since it was bought by China’s Wanda Group. Take an iconic location (the eponymous Great Wall of China), add one of the biggest stars in Hollywood (Matt Damon) and hire one of the most internationally acclaimed Chinese directors (Zhang Yimou) to take the helm…what could go wrong?

Hang on. Did anyone remember to write a script?

It’s simplistic, at best predictable and at worst incoherent, with what little dialogue there is being attempts at jokes so poor that the actors almost look embarrassed to be saying the lines. Matt Damon, in particular, looks a bit embarrassed by most of what he has to do.

The supporting characters each exist simply to fulfill a purpose in the story – whether that’s being gobbled up by a Tao Tie, teaching main characters English, helping others escape or whatever other contrived notion is required to nudge the plot where it needs to go.

Having said that, visually there’s much to admire. Everything from the presentation of the Wall itself to the colour-co-ordination of the different types of soldiers, from the choreography of the fight scenes to the rendering of thousands of legendary green monsters, swarming at the foot of the Wall and devouring any flesh that comes within the grasp of their claws, while they’re coming under fire from arrows, burning canon-balls or some hi-tech new weapons ignited by “black powder.”

But coming from the director of such masterpieces as Hero and The House of Flying Daggers, you’d probably expect even more – certainly from the fight choreography point of view – don’t expect anyone to fly away from the marauding beasts – except in a rather impressive early form of hot-air balloon.

However average the narrative, Matt Damon being and exotic and historic hero will draw in western fans, while the Wall and the largely Chinese cast are likely to result in big bucks – or the Chinese equivalent – flooding in from audiences there. And while most commentators are balancing the visual strengths against the narrative weaknesses, others have long bemoaned what they label the “whitewashing” of people from other ethnic backgrounds – in this case, casting white actors in a Chinese story. But this is not a film that casts white actors as Chinese characters – they’re playing westerners. And if people don’t want stories about westerners visiting China, it could be asked “what have you got against immigrants?” In this case, it’s not a true story. It’s just business.