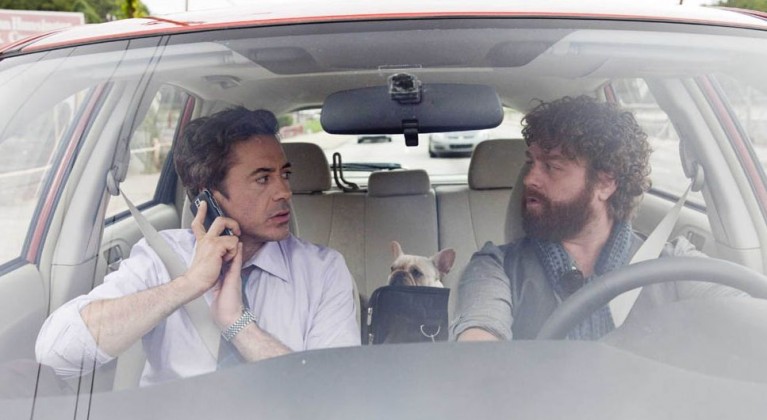 No-nonsense businessman Peter (Robert Downing Jr) is a long way from home, and he’s missing his wife, Sarah (Michelle Monaghan). She’s heavily pregnant and he’s on his way back to LA for the birth.

At the airport, he literally bumps into the overweight, bearded, eccentric aspiring actor Ethan (Zach Galifianakis) and after developing an immediate hatred for the guy, finds himself sitting right in front of him on the plane.

A misunderstanding sees the pair thrown off the plane together and put on the no-fly list. No bother, you might think, for as well as planes, there are trains and automobiles – but Peter’s wallet get left behind on the plane, leaving him stranded.

When Ethan pulls up alongside him in a hire-car, he grits his teeth and climbs in, having no idea how else he’s going to get home.

The mismatched odd-couple come up against a range of obstacles – from each other and from pretty much everyone else they meet (including angry Mexican border guards and Juliette Lewis’ drug dealer) – as they make their way cross-country. Even Peter’s attempt to escape half-way, by calling in a favour from his oldest friend Darryl (Jamie Foxx), fails to achieve its objective.

Can the pair make it back to LA in time for Peter to witness his child’s birth – without him killing Ethan on the way?

What worked so well with John Hughes’ 1987 film was that pompous as Steve Martin was and as irritating as John Candy was, we actually loved them both.

Robert Downey Jr’s visceral performance is impressive, spitting insults and angry one-liners with every turn of the wheel, which makes us laugh, but it doesn’t make us care. And Zach Galifianakis is too far removed from reality in his eccentricities – John Candy was the overweight kid who you felt sorry for because he got bullied at school, but there is no-one in real life as truly irritating and unappealing as Galifianakis. Again, there are times when he pushes this character so far that we laugh – a lot – but we never care about him. When Ethan gets dumped at the roadside, for example, we’re not sorry for him, but because Peter is as loathsome a creation, we don’t feel relief for him, either. We don’t really feel anything.

In Planes, Trains and Automobiles, we cared about both of them. Here, we care about neither of them.

That doesn’t make for a good start, when you’re being asked to spend an hour and a half with two characters who have almost no redeeming features – and having one character suggest this to the other during the film is less an in-joke than it is an admission of failure of characterisation.

The story itself doesn’t work as well as its obvious predecessor either – from less interesting locations, less clear motivations, less believable obstacles, less empathetic characters – it’s a clumsy, obvious, linear road-trip where even the plot points that are thrown in to concern us pay off in unbelievable or predictable ways, if at all.

Coming from the director of The Hangover and with two comic actors at the top of their game, Due Date is an incredibly wasted opportunity. It could’ve and should’ve been so funny, but there’s almost nothing to recommend it.

For a film of this type, the supporting characters can often give an added boost to proceedings, but actors of the standard and standing of Michelle Monaghan and Jamie Foxx should be given something to do, or overlooked for cheaper, less distracting alternatives.

It’s true that you will share Robert Downey Jr’s exasperation, but you won’t like yourself for it, because you’ll think that with his attitude, he brings the bad karma upon himself anyway.

In isolation, out of context, many of the scenes here would be funny – which means the trailer is likely to be appealing to anyone who likes the key creatives – but that makes the whole all the more disappointing.