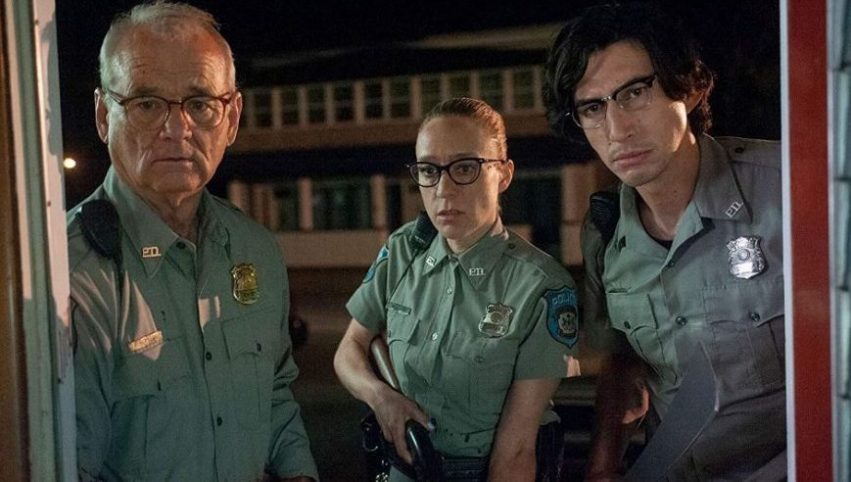 Strange things are afoot in the fictitious town of Centerville – none moreso than some locals being ripped to pieces in the diner.

It turns out that it wasn’t a wild animal – or indeed several. It was zombies.

It seems that the Earth has been knocked off its axis by “polar fracking,” which has brought the dead back to life – without particularly invigorating the somewhat laid-back and laconic living population.

One of the most idiosyncratic auteurs in the business, Jim Jarmusch, has – perhaps – tried to squeeze a little too much into one film here.

It’s a comedy horror that’s certainly not frightening and not funny often enough. And its efforts to be offbeat have a tendency to overshoot, making it at best knowing and at worst, arch.

With Jarmusch having worked with so many of the actors before, it’s not surprising that many of his typical traits are evident; the deadpan delivery of some cracking one-liners by both Bill Murray and Adam Driver is vintage Jarmusch, as are the whacky cameos from the likes of Tom Waits, Steve Buscemi, Tilda Swinton and Iggy Pop. As the junior police officer, Chloe Sevigny is the only person who really responds to anything in the way audience members might identify with, making her our way into this sadly rather unconvincing tale.

There are times where the satire hits home – in Jarmusch’s world, the undead retain their obsessions from everything from their iPhones to coffee; there are moments where apparent attempts to be political feel clumsy or blunt; there are instances of perfectly creditable gags being overused, as if he’s run out of ideas – repetition for comic effect can be used only so often; and too many occasions where what he clearly thinks are clever and original traits are – in fact – tired and familiar to most viewers who’ll have seen them used better elsewhere – the breaking of the fourth wall being a prime example.

When it almost seems like he’s trying to make a point – blaming the zombie apocalypse on fracking – it feels less like a comment on fossil fuel use than an attempt at a gag. And breaking cinematic conventions – while earning extra offbeat points – simply knocks any attempt at a coherent narrative off-course.

Despite hovering around some interesting areas, The Dead Don’t Die never really hits home and certainly doesn’t have the depth you might expect from a film that was chosen to open the Cannes Film Festival – in competition, no less. It’s almost as if Jarmusch pitched his idea to the Cannes selectors first and then ended up trying to hard to justify his pre-selection.

There’s much to enjoy, but disappointingly, there’s more to make you frown as it simply doesn’t come close to adding up to the sum of its parts. One running joke is Driver’s cop frequently predicting that “in the end, everything’s going to turn out bad.”  Sadly, his prediction isn’t far off.