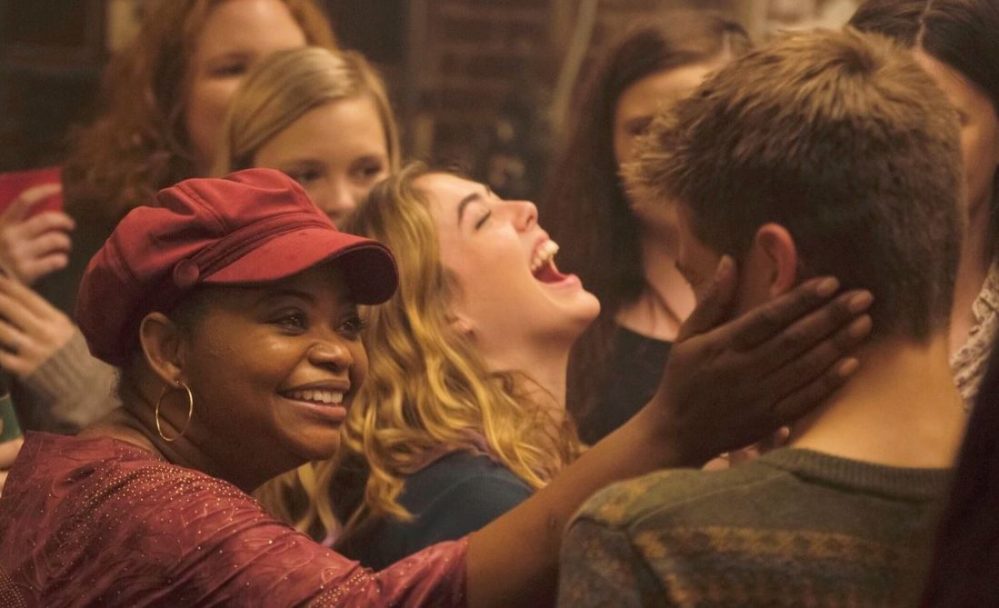 After her marriage breaks down, Erica (Juliette Lewis) gives up on life in San Diego and returns to her small hometown with her teenaged daughter Maggie (Diana Silvers).

Maggie falls in with the cool kids in school, but there’s not much for them to do.

A local vet’s assistant, Sue-Ann (Octavia Spencer) not only offers to let them party in her basement – she even provides the drink.

But the teenagers soon become suspicious of her motives as it emerges that Sue-Ann was at school with most of their parents.

Octavia Spencer – an Oscar-winner for The Help (also directed by Tate Taylor) and Oscar-nominated for Hidden Figures and The Shape of Water – wanted to get away from the “nurturing, sassy” woman she’s known for on screen and get to “the other side of the spectrum.”

If unhinged lunatic is the other side of the spectrum, she’s succeeded, but it’s unclear why anyone would want to play such a character – or indeed watch such a film.

With a wink to the audience, she is clearly having fun as she flips from caring and friendly neighbour to spurned stalker and vengeful demon, like a pantomime villain, while attempts – through flashbacks – to explain her behaviour can’t come close to winning round viewers to her side. You might feel sorry for the teenaged Sue-Ann but that’s a long way from persuading us that even a psychopath would have such a twisted response. There’s almost no point trying to explain someone’s behaviour if it’s so far from societal norms as to bear almost no relation to what she does years later – to people who had nothing to do with her own plight. She might be harbouring resentment from her youth, but is this the way to let off steam?

A key problem is that the insolent, selfish teenagers don’t elicit much more sympathy; Maggie is about the only character that anyone in the audience might identify with or care about.

Although this psycho-revenge-horror is far from the grown-up drama of The Help, the director Tate Taylor largely manages to ratchet up the tension and spring surprises. But most of the jumps are a little clumsy, obvious or so far beyond the pale that more sensitive viewers could find themselves hiding behind their hands.

With a central cast of little-known teenagers, the film is given some heft by some seasoned performers in supporting roles, such as Juliette Lewis, Luke Evans and Missi Pyle, but Allison Janney is so underused as to have little more than a cameo – although her acid-tongue is among the highlights.

From a narrative point of view, much doesn’t ring true – but in the context of the genre, that’s not really an issue – it doesn’t make much difference to the set pieces if you don’t believe Maggie would have fallen in with the cool crowd in the first place or that everyone in that school year would have parents who were in the same year at the same school, for example.

It’s not a bad film when taken in context of a B-movie exploitation psycho-thriller, but its nihilistic tone leaves you feeling a little tainted and wondering why you bothered.