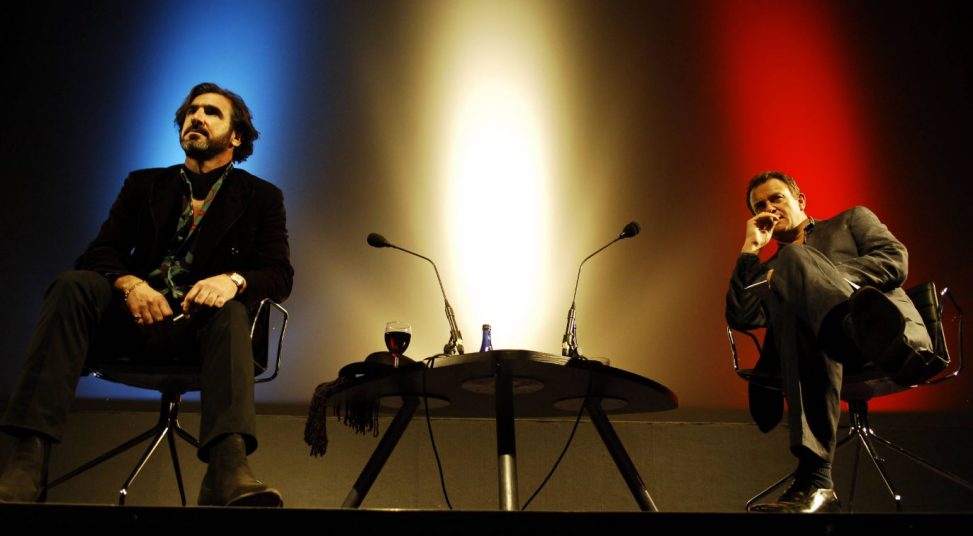 Cheryl (Victoria Hamilton) and Jed (Hugh Bonneville) have been living with each other for years. They’ve got used to it, so it comes as a bit of a surprise to both of them when they realise that the relationship isn’t going as well as they assumed it was.

Couple’s counselling only serves to reaffirm that it’s time for them to move on.

It all comes to a head when Jed – while researching an article on the French film director Thierry Gramandi (Eric Cantona) – gets a whole new perspective on what love means.

While dismissing everything the pretentious film-maker says out of hand, Jed realises that his best friend Marcus (Douglas Henshall) has based much of his own life around the Gramandi’s lessons.

It turns out that he used one of his tricks to ensnare his girlfriend, Sophie (Anne-Marie Duff).

But a chance meeting with his child-hood sweetheart makes Marcus reassess his feelings for Sophie, putting Jed in an unexpectedly awkward position.

After musing on the theme of damaged relationships with seven vignettes in Scenes of a Sexual Nature, writer Aschlin Ditta has stretched a single story to a little over an hour and twenty minutes – and even that’s stretched a little thinly.

Despite a handful of directorial flourishes, the plot lacks originality, being rather simplistic, and at times the drama seems slow. With most of the conversations – since that’s about as dramatic as it gets – taking place around dining tables or in offices, the odd shot of the River Thames and a race to the station (an anachronistic Eurostar terminal at Waterloo) aren’t enough to lift the story.

In truth, this could’ve been a perfectly acceptable hour-long TV drama, and any money saved could have been spent on better sound recording and lighting.

The references to the fictional French film-maker, Thierry Grimandi, if a little contrived and over-used, serve to bracket the story and provide a contrast between Jed’s earnest longing and Marcus’s shallow immaturity.

But there’s far too much telling and not enough showing as the evidently low budget gives us too much of the characters talking about what’s happened to them rather than letting us see it for ourselves. And what few characters we actually do get to see are largely blank canvases – they’re all stereotypically damaged in their own way, with no-one being truly evil or malicious – the stuff of real drama. It’s too gentle to be moving and not charming enough to warm the heart.

While on one level, it’s a harmless watch, the film is nothing like as challenging as it could – or should be – as it fails to dig its teeth into the fertile subject matter of thirty-something angst.