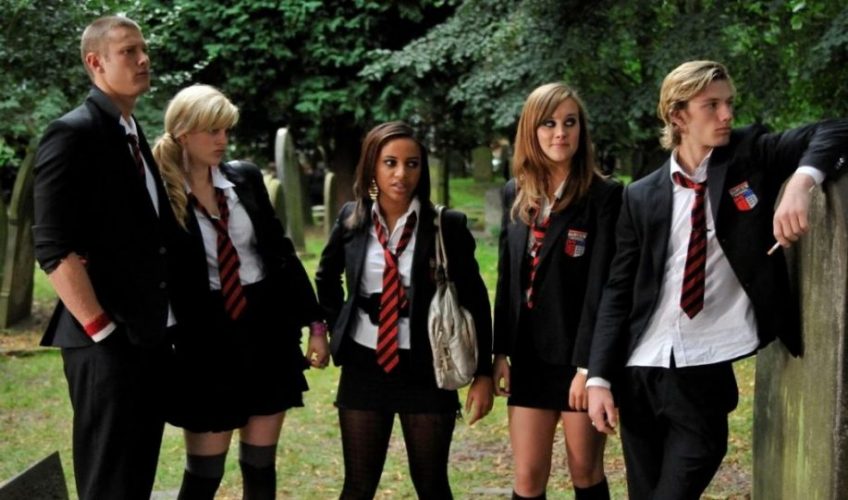 At the funeral of an overweight, picked on schoolboy, Darren (Calvin Dean), the school’s goody-two-shoes head girl Justine (Tuppence Middleton) is reading a eulogy when Darren’s one friend, Jason (Olly Alexander), starts protesting that she has no right to be saying anything about him, when she didn’t even know him.

That night, Justine ends up shunning her square friend Helena and joining the cool kids at a posh pool party, to celebrate – yes, celebrate – Darren’s passing.

At the party, Justine is wooed by Alexis (Dimitri Leondias), while the boss bully Bradley (Alex Pettyfer) can’t stop himself playing pranks on anyone he can get to.

The fun shudders to a halt when they start getting text messages from Darren. They assume that Jason has his phone, but when one-by-one, they keep meeting grizzly deaths and Jason appears to be next in line, they realise that Darren himself has come back from the grave to wreak his revenge on those who made his life hell.

Can any of the surviving teenagers outwit the zombie and live to tell the tale? Sadly, the answer to this is given before the opening credits.

This is one of those horrible low-budget horrors which is as corny as it is predictable.

A zombie emerges from his grave to avenge the cruel treatment he suffered at the hands of the bullying school elite.

Meanwhile, some of his tormentors grow to regret their behaviour, while others are determined to keep it up – and keep the zombie down.

So there’s a bit of a plot and an attempt to forge personalities, but squeezed into such a short space of time, the character arcs are too contrived.

The deaths are graphic and stylish, but the film follows the usual path of killing off the most odious people first, before working its way towards the more familiar faces and more sympathetic characters.

Because it treads such a familiar path, there’s little tension and the performances are generally as wooden as the stake you might want to arm yourself with to ward off all the evil.

The problem with this kind of film is always that the characters we’re supposed to be rooting for just aren’t sympathetic enough so in most cases, we’re delighted when they finally get the chop – and rather upset if they live to reach another scene.

There are frights and jumps – but most are signposted or otherwise obvious.

And with much of the acting failing to pass soap-opera standard, it doesn’t sit comfortably on the big screen and is unlikely to have much success on the international circuit.

Britain can do horror – but since Shaun of the Dead, attempts such as The Children and The Cottage have failed to impress and this, sadly, falls into the same category.

Perhaps the problem is finding its target – by aiming for a 15 Certificate, it means it can’t be as gory or explicit as it needs to be for the genre, which means it’s unlikely to find much of an audience outside the 15 to 18 year olds, who’ve swiped a few cans of Dad’s beer out of the fridge while he’s out at the cinema watching a more intelligent, more frightening film.

No-one here seems to be taking this film too seriously, which is probably a good thing, but while they all seem to be having fun, it’s not really that much fun for us. Titling the film as they did, they were asking for this – but if you want to know who’s really tormented, it’s not the bullied boy or his victims, but the audience who’ll pay to sit through it.