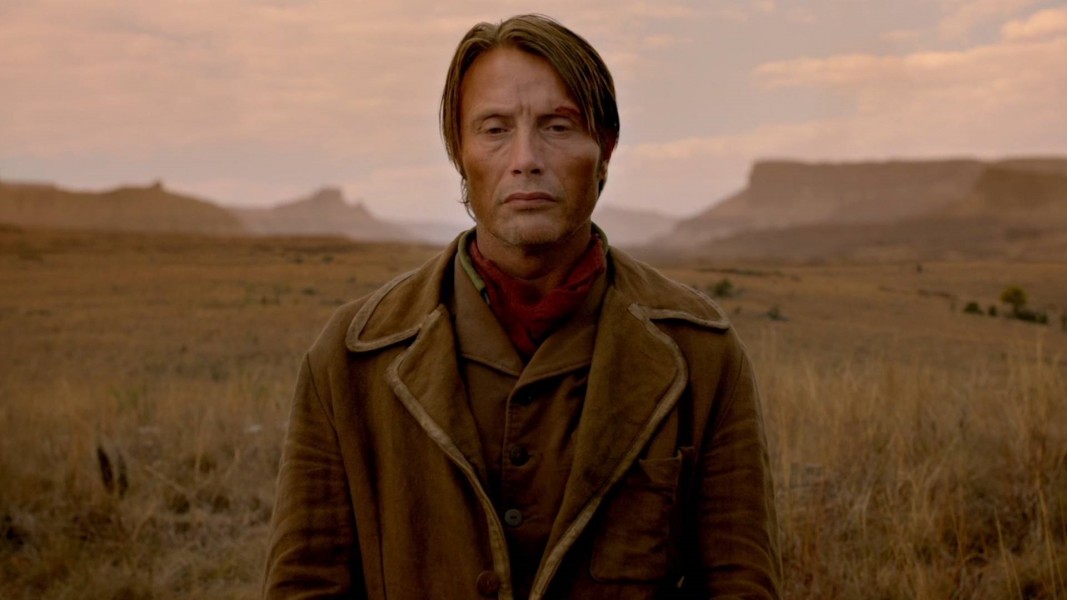 Jon’s wife and ten year old son have finally arrived to join him and start their new life.

But they find themselves sharing a stage-coach back to their remote farm with a pair of drunk thugs, who end up pushing Jon out of the carriage, raping his wife and then killing her and the boy. When Jon finally catches up with them, he shows them the mercy they deserve.

But as luck would have it, one of the killers was the brother of Colonel Delarue (Jeffrey Dean Morgan), a ruthless enforcer for the local oil baron, buying up property in the area at a snip, so that he can suck the liquid gold out from beneath their feet.

Delarue doesn’t need an excuse to terrorise the locals, so seeking to avenge his brother’s death just gives him all the more reason to kill indiscriminately and squeeze the very worst out of everyone in town, including the Sheriff (Douglas Henshall) and Mayor (Jonathan Pryce).

When the townsfolk discover the truth, their fear of Delarue surpasses any sympathy anyone might have for Jon, who soon finds himself with few allies in a war he cannot afford to lose.

The Salvation is a somewhat peculiar creature – it looks like a Western and it feels like a Western, but the main character speaks with a Danish accent and the film was shot in South Africa. It’s pleasing that one of the most effective films of the genre in recent years has little to do with the US; apart from Delarue, the main American characters are played by Brits, while the actors playing his henchman (Eric Cantona) and wench (Eva Green) are French.

Director Kristian Levring so confidently takes on the Americans at their own game, effectively portraying the requisite outsider as a complete foreigner. With all the usual building blocks to play with – from the quiet, wronged hero, to the brutal outlaws and their ruthless paymasters, to the appeasing townsfolk and the femme fatale – it’s perhaps not altogether surprising that The Salvation pushes all the right buttons for fans of one of the most American of genres.

The camera sucks the most gorgeous, rich colours out of the South African wilderness and the sets and costumes are as authentic as if they’d been teleported from nineteenth century America.

But while almost everything about this Western feels right, particularly in its efforts to remain faithful to its heritage, the narrative is necessarily – but disappointingly simplistic and linear. There’s a lot more black and white than grey and the inevitable conclusion is clear almost from the outset. Tweaking the accent of the protagonist isn’t ultimately enough of a twist to make it feel fresh.

Mikkelsen’s tired, drawn demeanour provides the necessary foundation for a compelling and entertaining drama, but while the supporting characters do precisely what the genre requires, there seems to be rather too much box ticking.

What it does, it does exceptionally well – and with almost no help from those who might claim to know how to do it best; it just doesn’t really do as much as it could to provide a fully original take on such familiar territory.