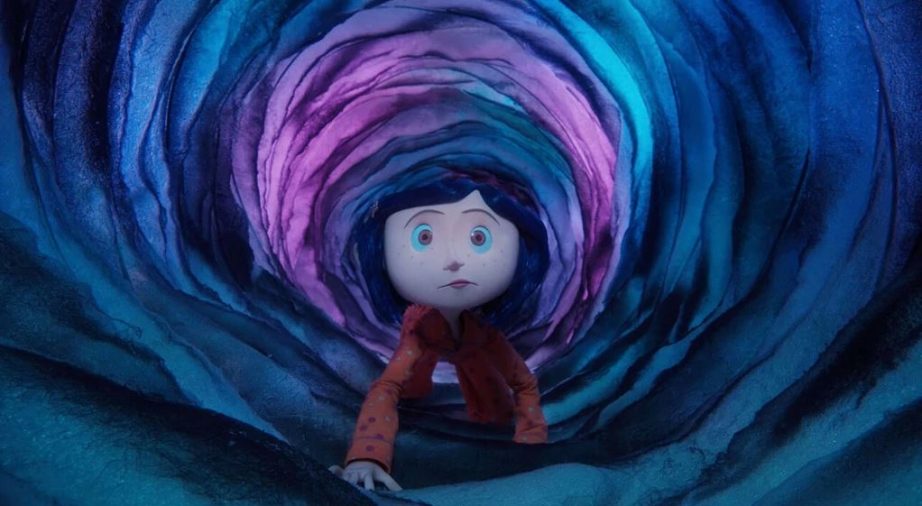 Young Coraline’s (Dakota Fanning) parents have just moved the family thousands of miles from all their friends, to a sparsely decorated, cavernous apartment in an imposing, hilltop mansion.

The surreal neighbours include a pair of overweight, elderly acrobats (Dawn French and Jennifer Saunders) and a troupe of dancing mice, led by a circus ringmaster (Ian McShane).

Coraline befriends a rebellious young boy who talks too much, Wybie (Robert Bailey Jr), who lives nearby – which is just as well, as her mother (Teri Hatcher) and father (John Hodgman) are too busy trying to be writers to have anything to do with her.

One night, she’s woken up by a mouse and follows it downstairs to find that a door in the wall, which was bricked up during the day, now opens to a tunnel. At the other end, Coraline finds a similar apartment, stylishly designed, with another mother cooking a fantastic meal and another father playing beautiful music. There’s another Wybie – who can’t talk – and she has another bedroom, full of beautiful furniture and wonderful toys.

Each morning, after she’s gone to sleep in her “other” apartment, she wakes up back home, but rushes back to the other world the first chance she gets.

Her other mother spoils her beyond her wildest dreams – and she loves it.

There’s only one slightly odd thing about the other world – everyone has buttons for eyes.

So when her other mother gives her an ultimatum – she can stay and be spoilt rotten forever – but she’ll have to sell, not her soul, but her eyes to the maternal devil, she realises that perhaps her real home is the best place to be after all.

But the next morning, she wakes up in her other home – and she can’t escape.

Coraline has to use all her resourcefulness to escape the clutches of evil and return to her humdrum – but comfortably safe and ultimately genuinely loving life.

The latest wonderful world from the director of The Nightmare Before Christmas is every bit as visually stunning as his previous work – the animation is delightfully 3D – in both senses – it uses stop-motion models and courtesy of a pair of special glasses, these models jump out of the screen at you.

The latter sense of the 3D is oddly understated – you almost feel that if you’re using a new technology, you should make the most of it, but although it helps to immerse you in the “other” world, there are very few cases of anything actually jumping out of the screen at you.

The characterisation is simplistic, but effective, and the voices fit perfectly – even though both as the mother and the other mother, Teri Hatcher is cast against the cute and ditsy type we’ve come to know her as in Desperate Housewives and The New Adventures of Superman.

The morals are equally simplistic – almost too blunt – greed is bad – respect your family. On the one hand, this makes the message clear for younger viewers, but on the other, there’s not much, story-wise, for adults to latch onto.

Both visually and thematically, this is a horrifyingly creepy film.

But here’s the main criticism of Coraline as a piece of film-making – who’s it aimed at? It’s far too creepy and frightening for younger children, doesn’t have the guns, chases or explosions that older children might want and the plot doesn’t really have the complexity to entertainment Mum and Dad.

So it’s a remarkable piece of film-making without an obvious audience.