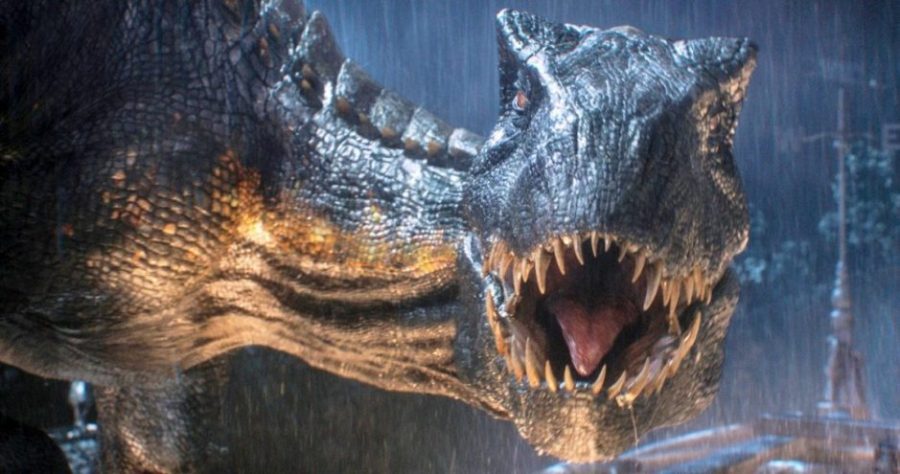 A volcano on Isla Nubar is threatening to wipe out the entire global population of dinosaurs, three years after the Jurassic World theme-park on the island was abandoned – and more than twenty years after the beasts were brought back from extinction.

The US Congress votes against trying to save them but an elderly and frail, idealistic billionaire Benjamin Lockwood (James Cromwell) decides to fund a private mission to rescue eleven of the most significant dinosaurs and transfer them to his own island, where they’ll be able to flourish without human interference.

His assistant (Geraldine Chaplin) calls in a dinosaur-rights campaigner, Claire Dearing (Bryce Dallas Howard), to lead the operation and at Lockwood’s monstrous mansion on his sprawling estate, his ambitious side-kick and self-appointed heir Eli Mills (Rafe Spall) explains how the project will work.

Claire knows she can’t do this without her ex-boyfriend, the animal behaviourist Owen Grady (Chris Pratt), so she tracks him down and persuades him to come along.

When the experts arrive on the island, they soon realise that some of those involved have a different idea about the real reason for the mission than they’d been led to believe – something they would never have signed up fot – and something that’s confirmed with catastrophic effects when they get back to the mainland.

A sequel to 2015’s Jurassic World – and the fifth film since Steven Spielberg brought dinosaurs back from extinction – Fallen Kingdom is – and let’s get this out of the way at the start – visually crafted with skill, from the creativity of the creature-design to the perfectly-judged precision of the animation and it’s tremendous fun as the legendary beasts give us a lesson or two in evolution.

But the plot is so monstrously lazy, contrived and derivative that you’ll wonder whether the film-makers had any intention other than to make us scream “Wow!” at the screen. Or perhaps just to make us scream; rather than stick to the fantasy thriller genre of the previous films, the team has changed tack this time, going literally and figuratively darker by making an outright horror – not a particularly scary one, to be fair, but a horror nonetheless.

From the remote gothic mansion and the mysterious young girl living in the rafters to the mad scientist playing God to create powerful new creatures, to the often claustrophobic setting, with much of the action at night, with a soundtrack laden with deep strings in minor keys and – of course – the close-ups of giant dinosaur teeth, dripping with mucus – there’s enough in there for any horror fan to tick off as prerequisites for the genre.

It’s not just the ingredients, but the recipe too is a similar box-ticking exercise – former couple reuniting for the greater good, supporting characters – both human and otherwise – disappearing for minutes on end and conveniently turning up exactly where and when the plot requires them to be, bad guys not noticing the good guys stowing away until the plot needs their cover to be blown, and plenty of diversity boxes ticked, thanks to a supporting cast that includes a Latino woman, a black man, a Chinese man, and old man, an old woman – the list goes on.

Efficient as they are, Bryce Dallas Howard and Chris Pratt seem to spend most of the film just waiting for the plot to take them one way or another, as their worthy efforts to save the world’s dinosaur’s are jeopardised by a not particularly original, interesting or surprising conspiracy.

The plot and the dialogue are consistently nonsense and often illogical, but if you check your brain in at the door, the set-pieces can’t be faulted and it’s certainly a lot of fun.

It’s one of the worst films you’ll ever enjoy and it’ll leave you feeling that unless they can come up with something more original next time, maybe the US Congress was right to vote for the re-extinction of the dinosaurs.