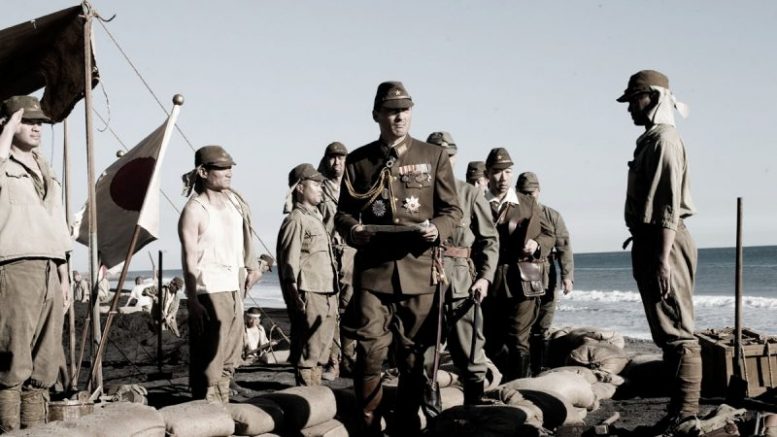 Just weeks after Clint Eastwood’s telling of an element of America’s assault on the Japanese island of Iwo Jima, towards the end of World War Two, he revisits the battle, telling the story from the Japanese point of view.

General Kuribayashi (Ken Watanabe) is flown in by Japan’s top brass to beef up their defences and he finds a military in disarray, abusing its soldiers and promoting suicide as a more honourable way out of battle than surrender.

He tries to infuse the military with his own sense of morality, but while he starts winning over the support of some of the younger soldiers who’d been losing faith in their leaders, some of his subordinates take against his approach and stage a mutiny.

When the two groups of soldiers try to go their seperate ways, some of them run into American soldiers, taking control of the island.

The necessity to continue fighting is unavoidable, but not before some of the soldiers from each side realise that they have more in common with their enemies than they thought.

It’s not unusual to see films that highlight the futility of war – and the similarity between antagonists – in this case, perhaps the biggest revelations for the Japanese soldiers when they encounter their enemy face on for the first time is that “Americans have mothers too.”

What is unusual is to see the battle from the other side – essentially, the Japanese are the good guys and the evil and brutal invading Americans are the baddies. But it’s only usual to see this as the film-makers are American, but with the film almost entirely in Japanese, it could easily have come from Japan.

There’s a sense in which the only reason anyone in the English speaking world will go to see this movie is because it’s directed by Clint Eastwood, not because they want to find out what the battle of Iwo Jima was like from the Japanese point of view.

That being the case, you have to wonder what Eastwood’s motivation was behind his two-part opus.

The desaturated colour palette – similar to that employed by Steven Spielberg in Saving Private Ryan – is an effective way of illustrating the bleak and single-minded nature of war, and in centring the plot on the experiences of two young soldiers, the film neatly puts ill-informed viewers at the heart of the story.

But there is little to grip the audience emotionally – less so because it will be harder for the intended western audience to identify with the Japanese protagonists – and there are no great revelations or surprises.