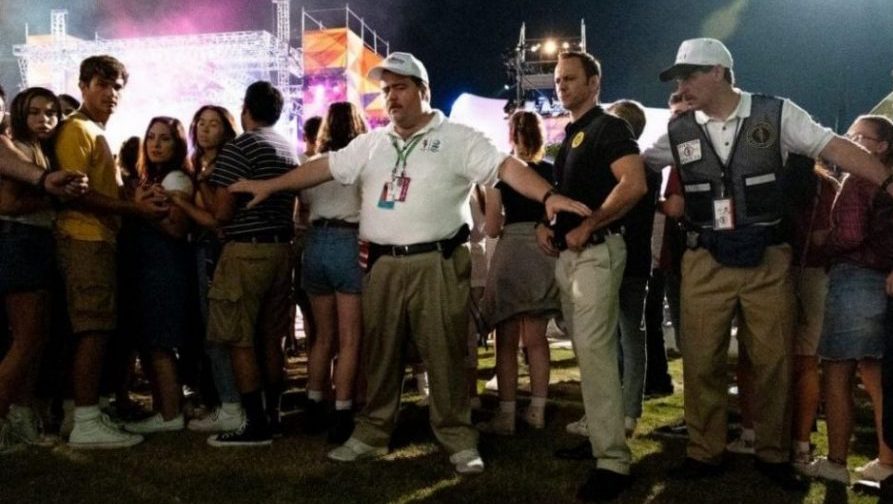 In the run-up to the 1996 Olympic Games, the US city of Atlanta is celebrating, showing off to the world that it’s going to put on an amazing show.

Richard Jewell (Paul Walter Hauser) has always wanted to be a police officer, but for now, the closest he can get to law enforcement is as a security guard at one of the televised concerts in the city centre.

When he spots an abandoned back-pack, he raises the alarm and the bomb squad confirm it’s a live device. As he’s trying to get members of the public to safety, the bomb explodes, but thanks to his quick work, casualties are kept to a minimum.

Richard is widely regarded as a hero, as the FBI’s (Jon Hamm) struggles to pin down the identity of the terrorist.

But a tip-off from a former employer makes the FBI think Richard might actually have planted the device himself, and when local journalist Kathy Scruggs (Olivia Wilde) gets wind of this development, the press turn the hero into a villain and only small-time lawyer Watson Bryant (Sam Rockwell) can stop history doing the same.

Back behind the camera again, Clint Eastwood delivers a powerful, real-life story of an put-upon everyman, fighting to protect his reputation against the authorities, desperate to protect their own.

It’s a compelling story that – like many – speaks truth to power, told through strong performances. Kathy Bates is perhaps a curious choice for an Oscar nomination for a role that doesn’t require much and a warm and witty Sam Rockwell is perhaps an odd omission as a recent former winner who carries the weight of the audience on his shoulders. Jon Hamm was a lot of fun too, as an agent who’s charming but weak and always on the back foot.

One difficulty, though, is that the character at the heart of the film – the one we’re meant to feel sorry for and be rooting for – is not an easy man to like. This is partly why Richard Jewell was targeted by the authorities in the first place. But in reality, he did fit the profile – a loner with a chequered past and aspirations to work in law enforcement – so it was perfectly right, in the circumstances, that the FBI should at least have taken an interest in him – something Jewell himself acknowledges, in his keenness to support the work of his fellow law enforcement officers.

Similarly, it’s not wrong for a journalist who finds this out to report this fact, whether it turns out to be true or not.

In Richard Jewell’s case, the only fault – perhaps – was the FBI’s leaking of its chief suspect to the press – which leads to one of the more controversial elements of the film; Olivia Wilde has been criticised for playing a woman who uses her sexuality to get what she wants – not very politically correct for these post #MeToo times, perhaps?

But if that’s what happened, that’s what happened – and you can certainly believe that an ambitious newspaper reporter could do things she might not be proud of in order to get the scoop of a lifetime. But is that what happened? Her newspaper responded to the film with a statement, saying that such a portrayal made it appear that it “facilitated or condoned offering sexual gratification to sources in exchange for stories. That is entirely false and malicious, and it is extremely defamatory and damaging.”

The film studio, Warner Bros, hit back, saying, “It is unfortunate and the ultimate irony that the Atlanta Journal-Constitution, having been a part of the rush to judgment of Richard Jewell, is now trying to malign our filmmakers and cast.”

After this controversy, the film suffered one of the poorest opening weekends of Clint Eastwood’s long and illustrious career.

But it’s unfair for a film to sink or swim based on off-screen controversy – does the film work, or not?

It has powerful messages – Richard Jewell would clearly have been spared a lot of pain if the story had not been published so early – and it begs the questions of what the real bomber might have been doing while the FBI was looking the wrong way – and what would other security guards do if they were to find a suspicious package?

But with the protagonist being a necessarily difficult character to warm to, however powerful the messages, interesting the questions or strong the performances, there’s little emotional pull and the film feels oddly inconsequential.