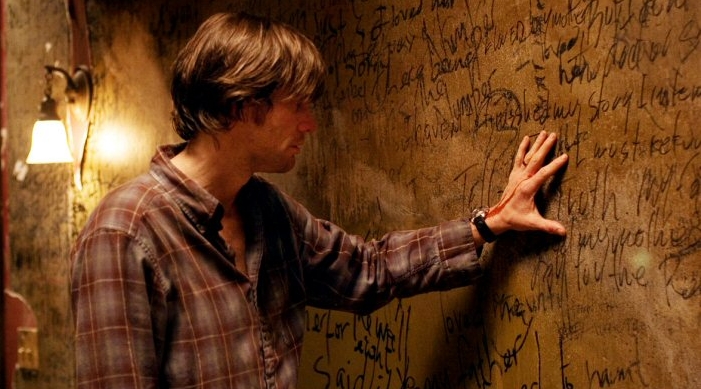 Walter (Jim Carrey) earns a living catching stray dogs. When a particularly violent one holds him up one day, it gives his wife Agatha (Virginia Madsen) time to stop off at a bookshop while she’s waiting for him to meet her.
There, she buys a book called The Number 23.
Finding it an interesting read, she passes it to Walter.
As he starts reading the book, he becomes aware of the number 23 in everything he does – whether it’s the numerical value of the letters in his name, his birthday 2/3 (the American for February 3rd) or something as blatant as a 2 on one sign and a 3 on a neighbouring one.
As he realises the number keeps occurring – in one form or another – in his life, he concludes that the book has been written about him – for him.
Soon, he’s inescapably obsessed by the number, becoming increasingly paranoid, convinced that the number is out to get him – or more precisely, out to get him to kill someone.
The only way for him to solve the puzzle, he believes, is to trace the novel’s author – the elusive and enigmatically named Topsy Kretts.

There’s a sense in which this kind of movie has been done many times before – as recently as last December’s Stranger than Fiction – with the central character believing he’s the subject of a book.
It also takes Carrey back into the familiar territory of feeling like he’s not in control of his own life, starring as he did in the Truman Show.
This is an altogether darker film, shifting as it does from a gently – almost surreally – comic opening to a blood-laced finale. This leaves Carrey with a difficult job – he doesn’t seem sure whether to play it for laughs or for shocks – and I’m not sure that he quite pulls it off.
Some of the occurences of the eponymous number are clever, others are unsatisfyingly co-incidental, some are just plain contrived – the rules change to make the numbers fit (April 19 and January 23 can’t both add up to 23).
The basic premise is moderately original though – there aren’t too many films about someone who believes a number is out to get him – and it is one of those films with a twist at the end which makes you stop and reassess the whole movie you’ve been watching.
If you accept the twist, you’ll enjoy the movie. If not, you’ll start unpicking the first act, wondering whether the signposts actually work in the context of the information that unfolds – and in a rather “in your face” way at that.
The “in your face” nature is carried right through to the final scene, where as the literary-style narrator of the film, Carrey’s character spells out exactly what any intelligent audience member should have concluded for themselves anyway.
Films that are trying to be clever should stick to their guns, have faith in their audience and neither pile on the clues too heavily nor explain too much to cinema-goers the makers fear won’t get it.
It’s a brave attempt at a different kind of film, but doesn’t quite make the grade.
If the star-rating system allowed, I’d probably award it 2.3 stars – but don’t tell Walter, as he’d probably read rather too much into it.