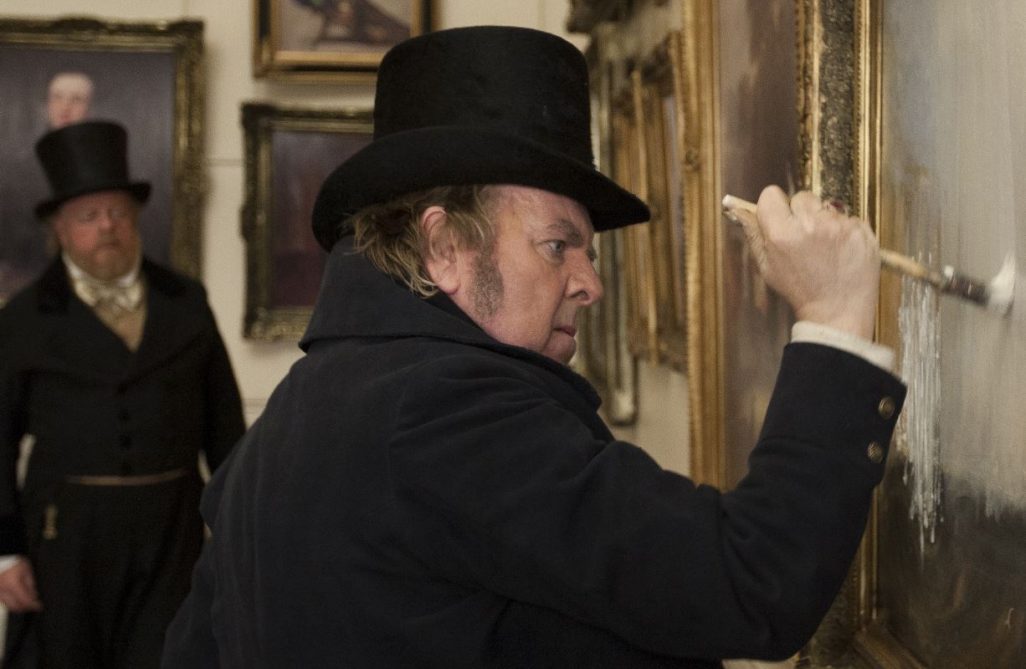 By the early years of the nineteenth century, JMW Turner was already making a name for himself as a highly respected landscape and seascape artist, with regular exhibitions at the Royal Academy.

As he reached middle age, his style and techniques started to break away from the mainstream, raising the ire of the public, the art community and the aristocracy who bought his works.

The increasingly cantankerous and independent-minded Turner spent his later years in brothels, taking advantage of his housemaid, spending time under an alias by the seaside, mixing spit with his paint and tying himself to a ship’s mast to better understand the kind of storms he wanted to paint.

The changing tastes of a country and the developing personality of Turner paint a picture of a man well ahead of his time.

Mike Leigh is a director mostly known for low budget social dramas – feeling true to life but not based on true stories. For the first time since 1999’s biopic of Gilbert & Sullivan, Topsy-Turvy, he turns his attention to a real-life character; one of the great artistic masters, JMW Turner.

To play the central character, he chose an actor born to the role – one of his regulars, Timothy Spall, who shows himself to be as much of a master of his own art as Turner himself, with a performance that deservedly earned him the Best Actor prize at Cannes and is likely to see himself in the running for more awards on both sides of the Atlantic come the spring.

When making a biopic, the hardest thing is often deciding which part of someone’s life to portray. In some cases, directors try to squeeze in the whole life – like last year’s Mandela: Long Walk to Freedom – and squeezing many decades into a couple of hours often feels a little episodic and rushed. In others, they tackle a very specific period of the character’s life – George VI wasn’t an especially interesting character until the abdication of his brother thrust him into the limelight and once he’d overcome his stutter, his life was less remarkable; The King’s Speech picked the most important part of his life to tackle. The upcoming The Imitation Game opts for something in between, majoring on how Alan Turing led the World War Two code-breakers at Bletchley Park, while paying brief visits to his childhood, where discovered the sexuality that led to his downfall, as featured in a brief flash-forward.

With Mr Turner, Leigh and Spall don’t seem to be particularly concerned about which specific period of Turner’s life they bring to the screen. The years we spend with him see Spall grunting his way spectacularly through encounters with other artists, the nobility, women of ill-repute and good, but there are few life-changing moments or particularly dramatic difficulties that he strives to overcome, in the more traditional sense of story-telling. Spall has remarked that they couldn’t feature earlier periods of the artist’s life because, as an actor, he’s too old to have got away with playing a younger man. But to bring the master’s final quarter of a century back to life, Spall could not have been more perfect.

The pair are less interested in the story they’re telling than the picture they’re painting of the man and the world he inhabited. The most dramatic elements of the film are his canvases and Spall’s interaction with them – the actor spent years studying to paint so that he could appear convincing at work. Dick Pope’s cinematography too is noteworthy, making almost every frame feel like one of Turner’s masterpieces.

Mr Turner is long – the length, perhaps, driven by a lack of real direction in the story that had to be told. But it’s beautiful, enlightening and engrossing, thanks to the fine work of Pope, Spall, Leigh and his usual, well-picked handful of ensemble supporting actors.