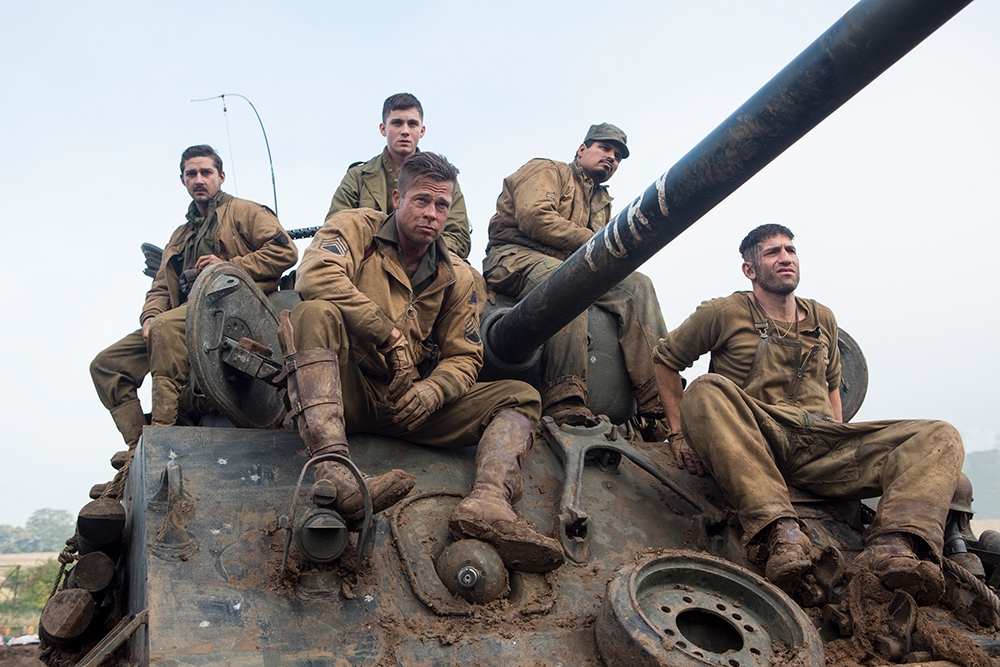 It’s April 1945. The Second World War is nearing its inevitable conclusion, but even with the Germans retreating, they are in no mood to surrender.

With the momentum of war behind them, the Americans are advancing through Germany, despite being stuck with ageing tanks that can’t compete with Germany’s state-of-the-art fleet.

At the head of one column of US tanks is Fury; inside are Sergeant Collier (Brad Pitt) and his loyal crew including his number two Boyd (Shia LaBeouf), driver Trini Michael Peña), gunner Travis (Jon Bernthal) and newboy Norman (Logan Lerman), whose previous posting was as a typist in the secretarial pool.

Norman finds it hard to adapt to the battlefield, raising the ire of his fellow crew members whose lives are in his hands, every time they come under fire.

The London Film Festival in the centenary year of the start of the First World War, oddly, both opened and closed with films set during the Second World War. After starting with The Imitation Game, about mathematician Alan Turing’s efforts to bring World War Two to an end by cracking Germany’s Enigma code, the event came to an end with Fury.

Brad Pitt – one of its executive producers as well as the lead actor – says Fury is more about highlighting the bravery of American war veterans than it is about entertainment – but, with David Ayer at the helm and Pitt’s own charisma filling almost every frame, it works on both levels.

Narratively, it’s very simplistic – the tank column goes from A to B and fights Germans on the way – then it goes from B to C, fighting more Germans as it goes – the soldiers stop for bite to eat before heading from C to D, fighting more Germans en route. Each journey has a particular purpose – but from the film’s point of view, that doesn’t really matter – the only purpose is to show us German and American tank crews bombarding each other.

Along with Logan Lerman’s unlikely journey from meek secretary to mighty tank gunner, this all makes you question Pitt’s assertion; in truth, Fury is a neat piece of Hollywood story-telling, more than it’s an homage to the men who sat in these giant tin cans on the front-lines.

Making it feel even less like a tribute to Second World War veterans is the over-simplistic characterisation of the central crew; the confident and charismatic leader (Pitt), the wimp who eventually earns his stripes (Lerman), the hill-billy (Bernthal), the bible-basher (LaBeouf) and rather bland everyman (Peña).

To be fair, it does illustrate the claustrophobic discomfort experienced by tank crews and the importance of the bond between the soldiers but the audience isn’t asked to identify with anyone except Lerman, making the camaraderie feel forced and ensuring that it’s hard to get too emotionally involved.

And while the battle choreography is often exciting, much of the military detail doesn’t feel right – would tank crews face off against each-other, firing huge bombs at each other, with the commanders standing up outside the hatches, to get a better view?

Fury is much more of a leave-your-brain-at-the-door-type action film than it is a deep meditation on the effects of warfare, making it enjoyable, but the entertainment will be short-lasting.