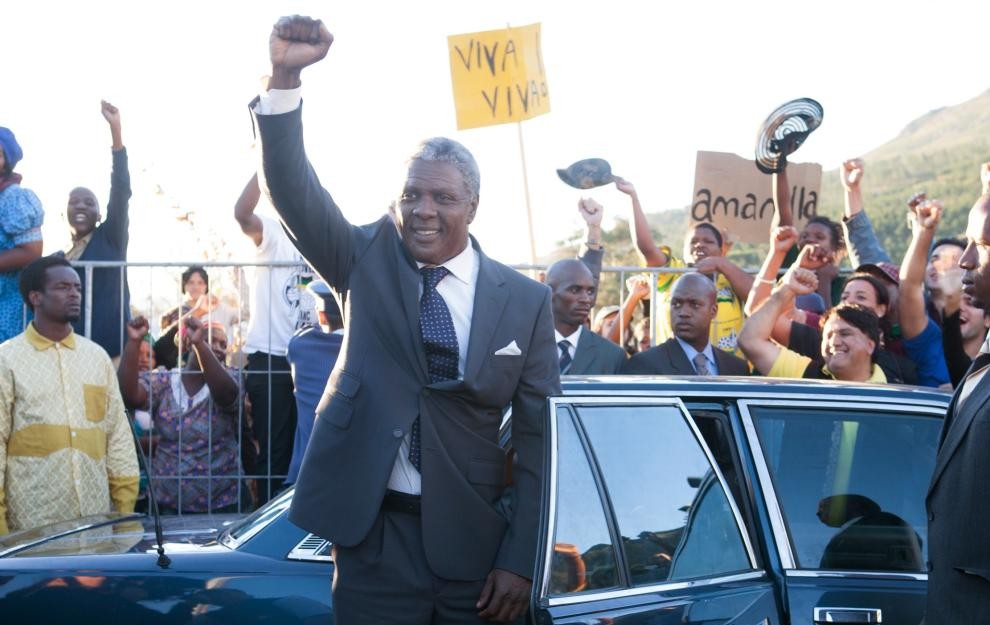 For most of the 20th Century, South Africa was governed by a brutal, racist minority of European immigrants, who treated the indigenous Africans as second class citizens, refusing them access to basic services, denying them justice and forcing them to live in poverty.

In the 1950s, the ANC – a political movement set up to combat the injustice – approached a charismatic young black lawyer, Nelson Mandela (Idris Elba) and persuaded him to join them to fight their cause.

The ANC is soon getting involved in criminal activity and political violence to try to undermine the apartheid system and in the early 1960s, its leaders – including Mandela – are jailed for conspiracy to overthrow the state.

During their incarceration, Mandela’s wife Winnie (Naomie Harris) continues to raise the profile of the fight against the apartheid regime, often finding herself on the wrong side of the law.

It’s 27 years before the combination of international pressure and a more forward-looking president FW de Klerk (Gys de Villiers) sees Mandela manage to negotiate a deal that sees them not only being released from prison, but taking over the country as South Africa’s first democratically elected majority government.

Don’t worry, I haven’t spoilt the ending for you – this is, of course, a true story – a story all the more familiar because of the timely death of Nelson Mandela, just weeks before the film’s release; the announcement of his death, in fact, came as the Duke and Duchess of Cambridge were attending the film’s premiere in Leicester Square.

95 years is a long life to put on screen and the real knack of a good biopic is knowing which part to choose. Mandela himself, of course, wrote about his whole life in his autobiography, but that doesn’t mean the film needs to tackle the same period in its entirety.

Attempting to do so makes the film a very long string of short scenes that tick off key moments one by one, leaving little chance to get to know any of the supporting characters at all. After two and a half hours, it’s unlikely you’ll be able to name any of his fellow ANC leaders, let alone care much about any of them. You don’t even get a true sense of what drives Mandela himself, as opposed to any other black man in his country.

The film makers would have been much better to have narrowed their scope to a shorter period of Mandela’s life – for example, the negotiations that led to the release from prison are certainly fascinating and provide a new window into an inspirational goliath of modern history.

But instead, Mandela: A Long Walk to Freedom lacks focus and becomes a long, staccato trip through a long and important life that digs below the surface of only Mandela himself and the second of his three wives.

Perhaps surprisingly, considering the source material and the high regard with which he is generally held internationally, it’s not a hagiography, touching on his womanising youth and the violence carried out by both sides. Having said that, in this telling of the story, most of the brutality on the black side was the work of what became known as the Mandela United Football Club – a criminal gang, led by Winnie Mandela, whose activities included inflicting beatings on people seen to be cooperating with the apartheid regime.

Although Idris Elba delivers a bravura performance and is pitch perfect on the voice, he doesn’t look enough like Nelson Mandela for us to believe that’s who we’re watching. Mandela was just too famous to be portrayed convincingly on film. Meryl Streep looked enough like Margaret Thatcher to pull it off, but generally, biopics work better when audiences aren’t that familiar with the subject. The King’s Speech, or The Look of Love are two recent examples where you don’t get distracted by your own perception of central character. Perhaps for this reason, Naomie Harris probably comes out of this film the best, as Winnie Mandela and her actions behind the scenes provide something new to wider audiences.