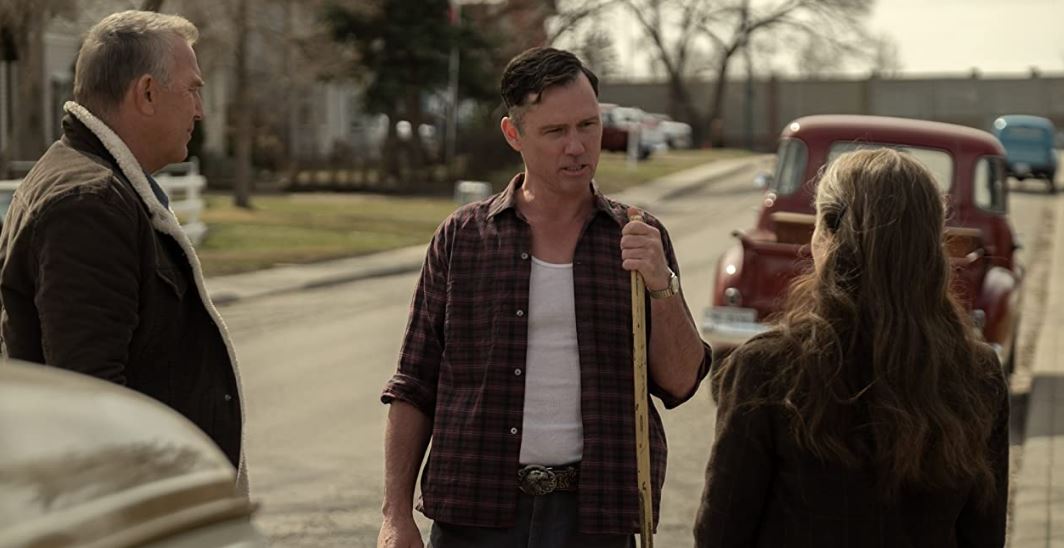 Some families have all the luck. Others don’t. The Blackledges don’t.

When James dies in a riding accident, the atmosphere on their ranch sours; Margaret and Lorna have never seen eye-to-eye – as they tell us. It isn’t long before Lorna meets someone else, marries again and moves into a small flat in town, where Jimmy still gets to see his doting grandparents.

Lorna’s new husband, Donnie Weboy (Will Brittain), is a member of a notorious family from the neighbouring state – and it’s not long before, with no announcement, he takes Lorna and Jimmy to live with his mother Blanche (Lesley Manville) in her remote North Dakota farmhouse.

Having already lost her son, Margaret is bereft by the loss of her grandson.

She can’t – as you’ll surmise from the title – let him go, so she persuades George to accompany her to North Dakota to try to bring him home.

But the Weboys – and their fearsome matriarch – are notorious for a reason, and it soon becomes clear that they have no intention of letting George and Margaret take their grandson out of the house, let alone out of the state.

Kevin Costner and Diane Lane – for many years the attractive young leads in romances and action films – throw a comforting confidence on this literary adaptation as they return as old-timers, trying to fill two holes left in their hearts. But there’s perhaps a little too much confidence, as for much of the film, the dialogue is so sparse, we’re supposed to be wowed by their ability to get the message across with a series of scowls and grunts.

That, in itself, is not a problem; if good acting can still nudge the plot along, it can make a long-term relationship feel all the more authentic.

But for much of the rest of the film, the script is so bursting with expositional dialogue that you may well find yourself screaming, “Not again!” when they bump into someone new and Margaret starts explaining her life story again – and again – and again. Yes, in the situation, she would – but the viewer doesn’t have to hear it every time. We know.

Set in the late 1960s, from the clothing to the cars, it presents an authentic portrayal of an era but without any sense of nostalgia that might make viewers long to return.

The story is uneven, turning from a brooding drama, to a creepy suspense film before descending into an astonishingly violent blood-bath that no-one could have predicted, or believed, were in not for the fact that Lesley Manville portrays her character more like a pantomime villain than a loving grandmother – and she lives in a farmhouse so remote that no-one could ever find it unless they followed one of her henchmen – sorry, nephews.

You don’t get a sense of why this family is so feared in the area – they’re cruel, selfish and vindictive but what do they have to show for it? What makes a family so bitter and twisted? There’s no drugs, prostitution, cattle rustling, no money.

Key to the plot is a native American drifter, whose own story seems as unlikely as everyone else’s.

There are moments to enjoy – from elements of the performances, to some of the violent exchanges and imagery that wouldn’t look out of place in a full-on horror – but they mostly belong in different films from each other – which makes it hard to identify a target audience; my parents would be interested in a drama in which an older couple try to save their grandson, but they’d be less interested in an illogical blood-letting chiller.

Let Him Go is a confused, well-meaning mess, that doesn’t really know what it’s trying to be or who it thinks it’s for. It’s unconvincing and takes too long to get where it’s going. But if you persist – and if you’re open-minded – there are some gems hidden under the rubble.