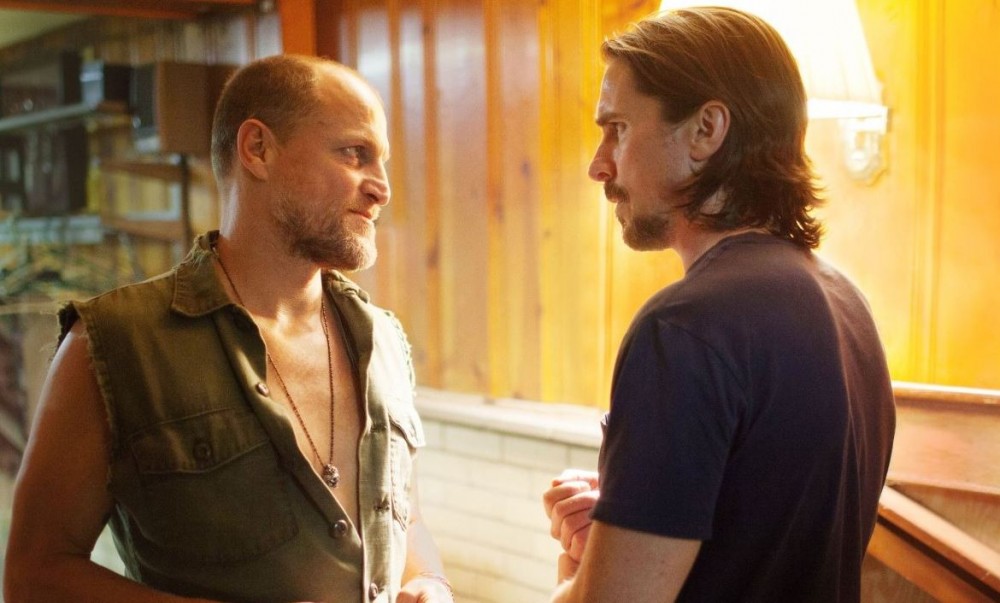 Russell (Christian Bale) is an honest and largely reliable worker in the kind of factory that seems to produce little more than a livelihood for the inhabitants of the small town beside it.

His younger brother Rodney (Casey Affleck) joined the army to keep himself out of mischief, but before being sent back to the Middle East, is getting into trouble back home, betting money he doesn’t have and getting involved in bare-knuckle fighting for local bookmaker John (Willem Dafoe) to pay off his debts.

John has, himself, got into debt with a ruthless gang leader Harlan (Woody Harrelson), who plays in an altogether bigger league. Against everyone’s advice, Rodney makes John an offer that he thinks will clear the slate for both of them; he’ll take a fall in a fight arranged by Harlan so that everyone can recoup the money they’re owed.

Harlan accepts the offer but then reneges on the deal, leaving John and Rodney dead.

When Russell finds out that his baby brother has been killed, he sets out for a bloody vengeance.

This is a powerful, unrelentingly bleak drama with a typically intense performance from Christian Bale as the good guy, forced to go bad to avenge a huge injustice and there’s no doubt that he is the one we’re rooting for in this film.

As if to ram the point home, we even see one stupid mistake send Russell to prison for a short stretch, in the process, losing him his girlfriend (Zoe Saldana) to the local police chief (Forest Whitaker).

The stature of the cast is astonishing for what’s clearly a small film, from Scott Cooper, the writer-director behind Crazy Heart. The four leads – Bale, Affleck, Harrelson and Dafoe – are pitch perfect in what they deliver. Whitaker feels a little uncomfortable with the straight nature of his cop, while Saldana is a surprisingly high profile actress for a role which is almost redundant.

Out of the Furnace is an effective enough genre piece with a strong ensemble cast, but its key problem is its length, or more specifically the pacing; at just under two hours, it’s well over an hour before Affleck’s demise launches the actual story Cooper is trying to tell – until then, you wouldn’t even know you were watching a revenge drama, as we spend far longer than is necessary getting to know Rodney, seeing Russel dealing the consequences of one drink too many, seeing their father die, learning just how brutal Harlan is, seeing how John is a crooked guy with a heart and so on.

These are all perfectly valid elements of the narrative but we could end up in the same place more quickly and no less effectively by spending less time digging into some of these supporting characters, many of whom serve little purposes other than to nudge the plot along. And too many of the characters, while played well enough, fill archetypal roles that make the story too easy to predict – the down-on-his-luck responsible older brother who makes one mistake that messes up his life, while he’s trying to keep an eye on his crazy younger brother, who gets into debt with the crook with a heart, who himself is in it up to his neck with the most brutal, chest-baring, lollipop-sucking drug boss west of Manhattan. Not to mention the kindly uncle (Sam Shepard) and the ex-girlfriend who ends up with the cop who’s trying to stop our hero taking the law into his own hands.

It feels like too much of a box-ticking exercise – the only box which isn’t ticked is “edit script.”