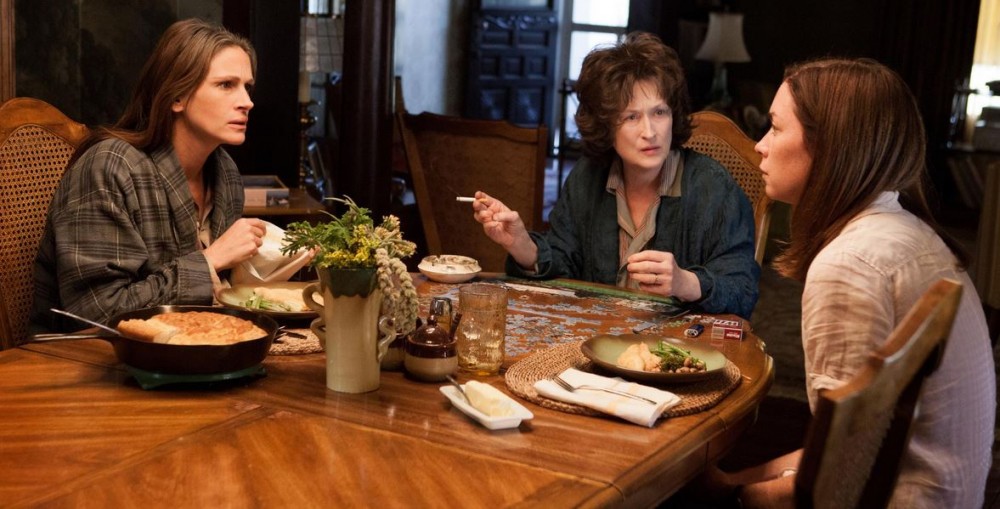 Ivy (Julianne Nicholson) feels bitter that while she’s the only daughter who stayed locally, and took on the responsibility of being there for her parents, she gets no thanks from her mother, who’s more interested in the older Barbara (Julia Roberts). Barbara is trying to disguise the marital difficulties she’s having with husband Bill (Ewan McGregor). The youngest daughter Karen (Juliette Lewis) is more interested in introducing the family to her fiance, the rich, thrice-divorced Steve (Dermot Mulroney) than she is in the family turmoil going on around her.

When the truth about Beverly’s disappearance emerges, more family truths start bubbling to the surface, causing unbearable tension as the fragile relationships begin to shatter.

The woman in need of comfort and support is, perhaps, the least deserving, and honour and respect go only so far, when reality pushes everyone to their limits.

With a cast of this calibre, it’s little surprise that it’s received a slew of acting nominations during awards season. More surprising, though, is that at the Golden Globes, this tale of bitterness, betrayal, jealousy, hate, frustration and disappointment, centred on an alcoholic, pill-popping witch who’s so unpleasant that her long-suffering husband kills himself, was nominated in the comedy category. Yes, it has comic moments – desperately darkly comic – but that tragedy often harbours humour cannot fashion a comedy out of such unremittingly bleak material.

It’s based on a stage play and looks like it, with almost the entirety of the action taking place in and around the family’s Oklahoma house. It’s interesting that set in the middle of the vast, open plains, the film feels as claustrophobic as its domestic setting dictates.

While this plays like an acting masterclass, a film needs more than impressive performances to engage an audience and spending two hours with a bunch of selfish women, clawing at each other and their partners, is not especially entertaining. A twist or two cannot do much to win over viewers, because one turns you against one of the few likeable characters while the other stops you rooting for the one relationship you want to work out. Interestingly, from a casting point of view, the most sympathetic character, Ivy, is played by the least well-known of the key cast – but perhaps her sympathetic nature comes from her blandness.

The writer, Tracy Letts, delivers a handful of explosive scenes – mostly involving women shouting at each other in different parts of the house – but the overall impression left is a downbeat tale of unpleasant people making each other even more unhappy – and the audience thinking they deserve the misery.

Oh. And if you’re wondering about the rather clumsy title. August is the hot summer month in which the temperatures rise in the Weston family. And the county in which the reunion takes place is pronounced “Oh Sage.”