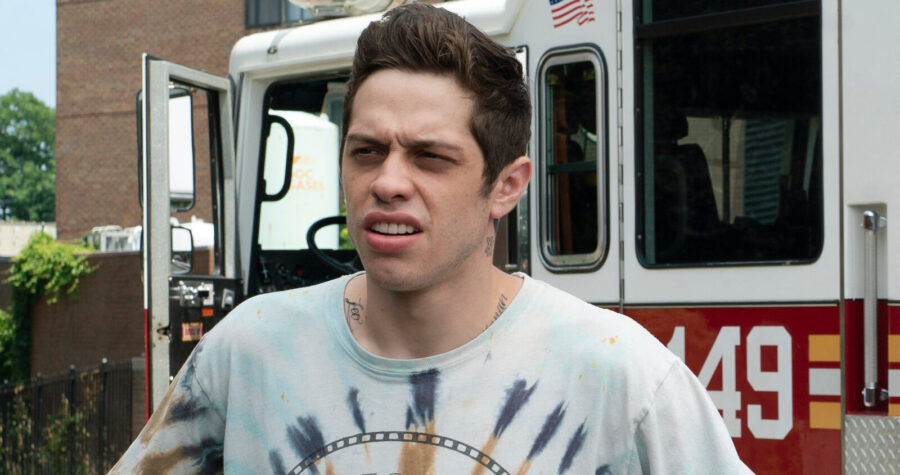 Scott (Pete Davidson) is 24 but behaves like a teenager – and even that’s probably a little flattering. He’s refused to grow-up, since his fire-fighter father died during a rescue operation when he was just 7 years old.

His younger sister (Maude Apatow) is off to university, leaving him at home alone with his mother, Margie (Marisa Tomei).

He spends his days mostly smoking pot with his friends, as he dreams of making a career as a tattoo artist.

When his mother finds her first boyfriend since the death of his father, Scott finds himself losing the only rock he’s known in his life; she’s devoted the last seventeen years to her children and now she’s ready to think about herself again.

The boyfriend, Ray (Bill Burr), turns out to be a fire-fighter himself, holding out the prospect that Scott might be able to reconnect with the legacy of his father – although his anger towards the man who’s turned his life upside down – and the fear that his mother might lose another partner – make him unwilling or unable to accept the new normal.

Scott has a lot of growing up to do; could Ray be the catalyst that prompts him to do it?

Directed and co-written by Judd Apatow – who popularised his own brand of comedy in films such as Knocked Up, Funny People, This is 40 and Trainwreck – this film delivers a comedy with a very different feel.

Despite some scenes reminiscent of Seth Rogen’s stoner friends in Knocked Up, the often puerile humour has been replaced by the more thoughtful observations of a more mature director, examining the complexities of family life.

It’s based, in part, on star Pete Davidson’s own life – he lost his fire-fighter father in 9/11 – and as arrogant, childish and selfish as the lead character is, we can feel his pain and understand his questionable behaviour. A character like this is usually the bad guy or the loser best-friend but Davidson and Apatow make Scott work as an empathetic protagonist. Among Scott’s interesting traits is that however proud others think he should be of his father’s legacy, all he can think of is how his death left a devastating hole in his family – what kind of a hero would do that?

We watch Scott as he tries – and fails – to grow, taking two steps backwards for each step forwards, as belated coming-of-age tale begins.

Unlike Apatow’s previous films, which centre on global comedy stars, in this case, Saturday Night Live star Pete Davidson will be largely unknown outside the US, but the supporting cast is peppered with powerful performances by familiar faces, such as Marisa Tomei and Steve Buscemi. Bill Burr’s challenging turn as the hot-tempered newcomer to the family is particularly interesting as his relationship with Scott warms – at a glacial pace.

At times, it’s a challenging watch and doesn’t always ring true, but the King of Staten Island is an engaging and rewarding character comedy that thoughtfully draws you into Scott’s world and leaves you feeling that there’s hope for all of us.