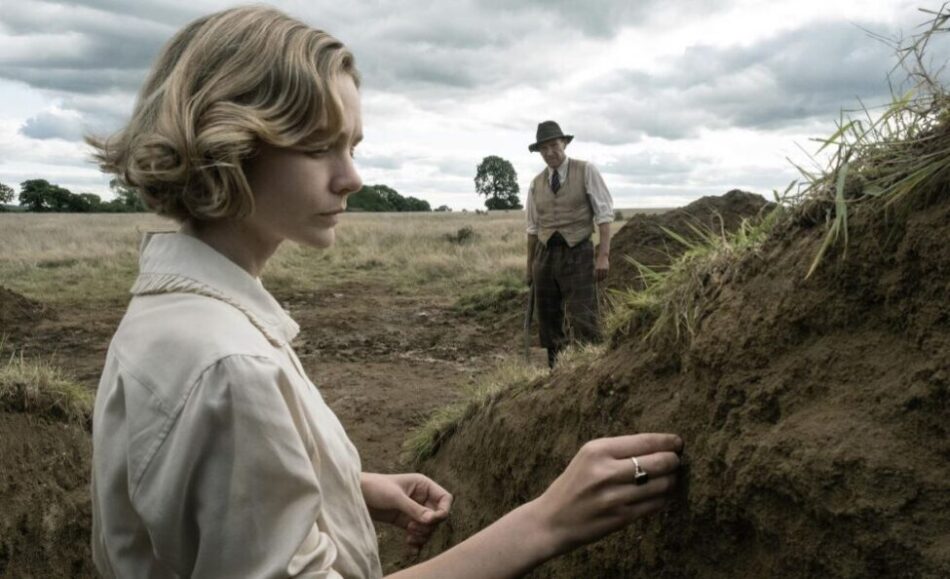 It’s 1939 and there’s a sense that the country is closing down, with war against Germany looming large over everything.

A widowed Suffolk landowner, Edith Pretty (Carey Mulligan), has other things on her mind. Long before her husband’s death, they’d been planning to excavate some mounds on their land at Sutton Hoo, expecting to find Viking graves.

She poaches an amateur, self-taught archeaologist, Basil Brown (Ralph Fiennes), from the local museum and persuades him to start digging.

What he finds astonishes historians across the country; the mounds are not Viking burial chambers, but from the period of the Anglo Saxons, centuries earlier – and in the hull of a buried ship, they find Saxon gold jewellery.

Soon, the British museum’s expert, Charles Phillips (Ken Stott), arrives to lay claim to the site – and its treasures.

In perhaps one of his most underplayed performances, Ralph Fiennes is magnetic as the thoughtful, passionate archaeologist who’s determined to reveal a piece of history – while remaining equally determined to seek the recognition that his efforts deserve.

In a similarly quiet turn, Carey Mulligan’s Edith is equally determined to uncover the secrets of her land and to fight to keep them in Suffolk.

It’s beautifully shot and the plot – like the Saxon treasure at its heart – is revealed slowly and the arrival of the big guns from London marks a narrative turning point, where it goes from being a tale of two intrepid amateurs impressing the establishment to two indefatigable underdogs fighting that establishment.

But as the film starts to take a different direction, another sub-plot is thrown in to muddy the waters. A film about the unlikely discovery of one of the most important hoards in history improbably turns into a tale of unrequited love as a young, married archaeologist, Peggy (Lily James), falls for Edith’s cousin (Johnny Flynn – almost unrecognisable from the recent Stardust), a photographer brought in to record the project – until he’s conscripted to join the Forces.

It’s as if Netflix subscribers can’t enjoy a film about history being written – about history being discovered – without a blossoming love affair between two incidental characters. A key part of the story – the coroner’s hearing to establish ownership of the discovery – is all but overlooked.

As an adaptation of a fictionalised novel by a relative of Peggy, you can see how this story ended up on screen, but perhaps a story about the discovery itself might have been more compelling than a love story set against the backdrop of other people doing something more interesting.