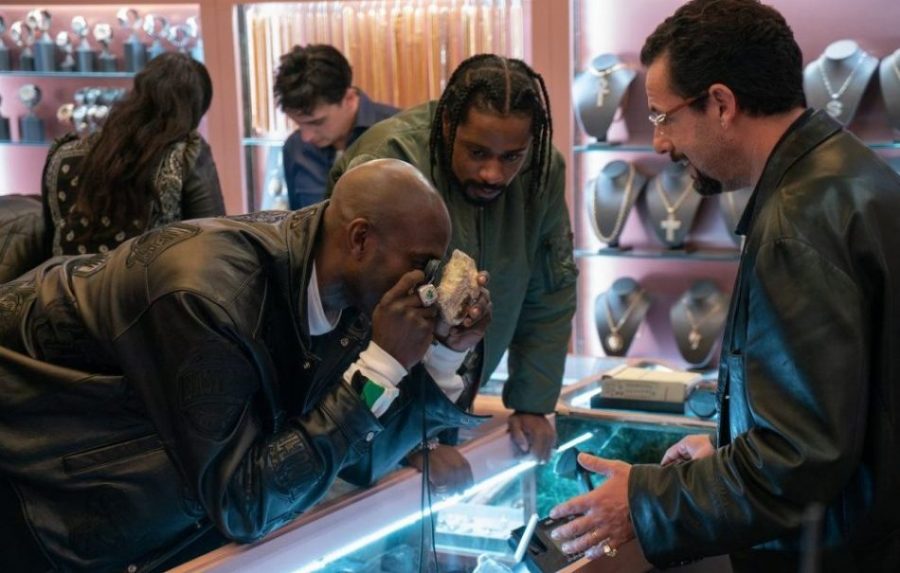 Betting on basketball is his thing but he seems to spend most of his life taking out big loans or pawning other people’s gems to feed his habit.

As well as watching his business crumble around him, his personal life is also falling apart; his marriage is heading for divorce and his mistress appears to be sleeping around.

Howard has convinced himself that he just needs one thing to go right for him and then everything else will click back into place – one bet, one deal and everything will be OK.

But when he spots the deal of a life-time – an uncut gem from Ethiopia – selling it for what it’s worth to make enough money to clear his debts in the tough New York underworld isn’t as smooth as he hopes. Obviously.

Adam Sandler’s Howard isn’t like any jeweller most of us will come across; he’s not standing behind a counter at a high-street shop that his namesake might once have run – he’s many floors up, behind security doors in Manhattan’s Diamond District, dealing with items worth more than the entire contents of a Ratner’s store combined.

But he seems to spend more time doing business on his phone as he shuffles around the bustling streets, from loan-shark to pawn-broker to book-makers, certain that his next deal will fix everything – but then what.

Over one fateful Passover weekend, the Good Times directors Benny and Josh Safdie follow Sandler on a frenetic journey of misplaced optimism as, at every turn, he makes exactly the decision that viewers wouldn’t make, to increasingly nail-biting effect. But a jeweller who chooses to swim with the big fish in the underworld rather than deal with consumers on the high street has to accept what’s coming to him.

With an electronic score by Daniel Lopatin, peppered with songs on distant radios, the music acts as a thumping heart-beat as Howard pounds the streets with mounting determination or watches basketball games on TV with increasing desperation.

Sandler is gripping – if not particularly empathetic as a protagonist – and deservedly picked up recognition from some of the smaller awards bodies, but was overlooked by the big boys – much as his underdog character is during this film – overlooked by everyone except the ruthless loan-sharks and their goons – and anyone he’s had to clamber over in his attempts to progress.

The optimism of this emotional and professional wreck is at once inspiring and pitiful as Uncut Gems drags you down a hole in this nihilistic psychological thriller.