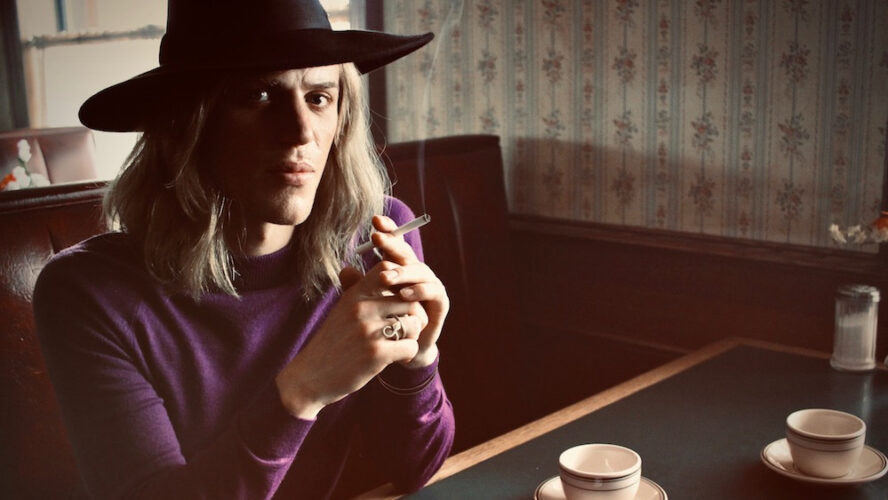 It’s 1971 and a young David Bowie (Johnny Flynn) has made his name internationally with his seminal hit Space Oddity, but his latest album – The Man Who Sold The World – has tanked in the US and his record label, Mercury, is ready to drop him.

There’s just one executive at Mercury who can see his potential; Ron Oberman (Marc Maron) takes him on a tour of the US to try to boost his profile and persuade the label to invest more time and money in promoting him.

But without full backing from the label, they can’t arrange a work visa or pay for hotels, so he’s not allowed to perform at public concerts, limiting his tour to singing at private parties and doing interviews with music journalists.

Hard as Marc tries to set up worthwhile interviews and gigs, David doesn’t make things easy – keen to present himself as the enigmatic artist, prancing around in a “dress for men” and talking airy-fairy nonsense, rather than getting serious about his music.

It’s an odd-couple road-trip across the US, in which David learns a thing or two about being a real star – and a real adult – and soaks up some inspiration to take his career to the next stage – but it’s an experience that shows that even the most influential of musicians can’t take success for granted.

It’s hard to imagine a time when David Bowie wasn’t one of the most influential characters in modern music – and watching his inability to interest almost anyone, even after Space Oddity, is almost heart-breaking. He cuts a pathetic figure.

But with the film opening with a caption reading “What Follows Is (Mostly) Fiction,” it’s hard to know how much weight to put on its relationship with real events.

Unlike in other recent biopics, Bohemian Rhapsody and Rocketman, Johnny Flynn doesn’t make much of an effort to look, or even sound, like the real-life Bowie, although when he sings – and Flynn is an accomplished singer, as well as an actor – he develops much more of a Bowie-like air.

Another difference between this film and the earlier two is that this was made without the blessing of those around the star and so without the rights to Bowie’s music, limiting what we hear to cover versions of other people’s songs.

Not enabling the audience to hear the central character singing some of his most iconic songs somewhat hampers the film-makers’ ability to persuade us of the foolishness of the industry executives and journalists who couldn’t spot the next big thing – if anything, this version of Bowie is presented as an artist who is more interested in being quirky and arch than being taken seriously – even with strong direction from Marc Maron’s Ron Oberman, Flynn’s Bowie seems unable to follow the simplest of instructions; “talk about your music.”

There is something else on his mind – Bowie’s half brother was suffering from mental illness, as had other relatives, and we’re told that Bowie was worried that the same might happen to him; many of his early songs even tackled the subject; his single All The Madmen is the one that’s just bombed in the US. But rather than talk about how this fear influenced his music, he’d just turn up to interview after interview, wearing the dress he models on the cover of the UK release of The Man Who Sold The World, and offend, confuse or bore the interviewers.

“I need to be known – I need them to know me,” he protests – as if being famous is more important than being respected. Was that really the modus operandi of the young Bowie? Seeing someone sabotage their own career is almost as sad as seeing someone who’s so misunderstood that his genius almost got missed.

He gets plenty of advice on his journey from ignominy – “They want you to be more like Bolan” – but ignores most of it, which is a surefire way to ensure that the audience loses sympathy for the central character.

But one bit of advice does stick – “If you can’t be yourself, be someone else.” Ron Oberman introduces him to the music of Iggy Pop and the psychobilly pioneer known as the Legendary Stardust Cowboy – you can almost see the cogs spinning as the character of Ziggy Stardust emerges – one of many reinventions of himself in a career that finally launched him into music history.

The first time you get a sense that this David Bowie should be a star is when he bursts onto stage in the final scene – but that’s directorial subterfuge, rather than narrative catharsis – with a film bursting with flashbacks, not least revolving around his relationships with his half-brother and his petulant (first) wife Angie (Jena Malone), we could’ve seen him on stage sooner – but that would’ve made his earlier situation even harder to accept.

Flynn does his best with what he’s got to work with, but it’s Marc Maron whose performance as his babysitter jumps off the screen – he represents the audience on this journey, knowing there’s a talent in there and desperately trying to squeeze it out before it’s too late.

Stardust is one of those films where you don’t really get a sense of any stardust until its too late to care – a biopic about a musical genius without his music. It’s less of a musical biopic than it is a drama about someone who isn’t mentally ill but worries he might be. Bowie fans would probably prefer to find some real Bowie to watch, while those who don’t know much about the star already won’t feel they know much more after watching this film.