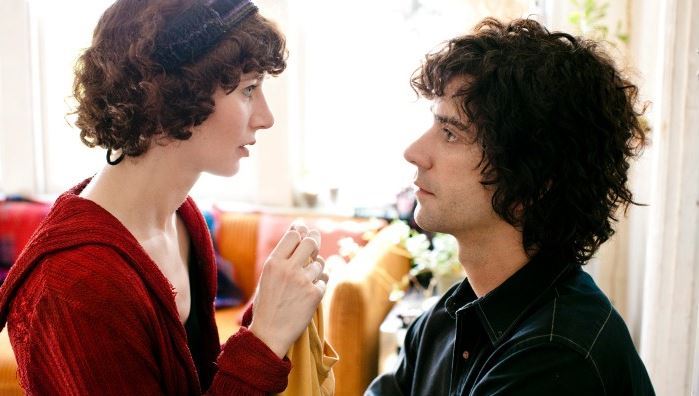 Dance teacher Sophie (Miranda July) and her IT-support boyfriend Jason (Hamish Linklater) are about to adopt a cat from the pet hospital.

They’re told it’ll be another few weeks before the cat is recovered from some surgery. Initially, they’re frustrated at the delay, but they soon conclude that once the cat arrives, their lives will be somewhat governed by the pet, which actually means they have only another few weeks of freedom.

Jason ends up jacking in the IT support to do something more useful with his life; he starts working for an environmental charity.

Sophie finds herself beginning an affair with a middle-aged father, Marshall (David Warshofsky).

This time they give themselves allows them a chance to consider what they really want from their future.

Miranda July is an artist, first and foremost. In her first feature, six years ago, she played an artist – with emotional issues, in accordance with the low budget American indy genre. Playing an artist, she gave us an accomplished and delightfully quirky comic take on life and love. Playing a dancing instructor, watching her arms flailing about as she pirouettes, she looks like she’s scrambling for help.

So much about Me and You and Everyone We Know was right – from the characters who were as likeable as they were believable, a coherent storyline, accurate observations about such social constructs as internet dating and precocious teenagers. So much about The Future is wrong. From the moment it opens with Miranda July delivering the voiceover of a cat, looking forward to being adopted, it is already too quirky for its own good.

In M&Y&EWK, July herself was on the edge of the action, part of an ensemble, including the remarkable John Hawkes and some of the most endearing and dysfunctional kids, but here, she’s right at the centre, and she doesn’t have the charisma or screen presence to carry a film herself. Hamish Linklater is a blank canvas compared with the immensely watchable Hawkes, whose rise to the top of independent cinema (as well as the fringes of blockbusters) is unlikely to be matched by anyone involved in this film.

From the squawky cat voice, to the contrived premise and arch storyline and dull characters, nothing about this film gels. Enthusiasts of the genre and fans of July’s previous effort will want to like this, but they’ll be hugely disappointed and irritated.

The Future is a mess she needs to consign her past.