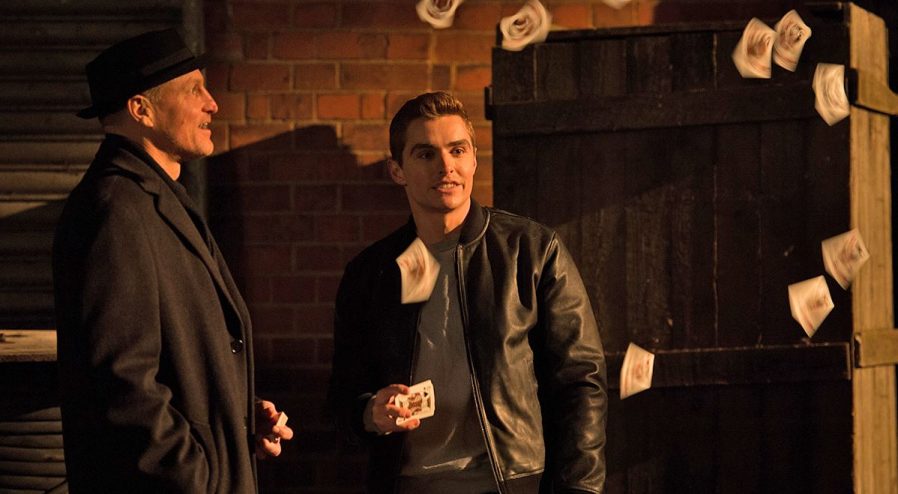 In Now You See Me, we met a group of four magicians, thrown together by unseen forces to use their skills to expose scandals. With Isla Fisher’s Henley no longer in the picture, Lula (Lizzy Caplan) has been brought in join fellow illusionist Daniel Atlas (Jesse Eisenberg), hypnotist Merrick McKinney (Woody Harrelson) and street magician Jack Wilder (Dave Franco) as they set out to bring down a major communications company that plans to steal the personal data of its customers.

With the FBI on their trail, the Horsemen have to stay under the radar until they come out of the shadows for each mission – but having an inside man helps them keep one step ahead of the authorities.

But when FBI agent Dylan Rhodes (Mark Ruffalo) is exposed as one of the Horsemen during a televised performance, he has to join the rest of the team as they go on the run.

Their escape doesn’t go to plan and they find themselves being roped into a plot by an enigmatic billionaire, Walter Mabry (Daniel Radcliffe), to find and steal a computer drive which could allow anyone who has it to find out all his secrets.

With the FBI on their trail from one direction and Walter’s thugs after them from another, the Horsemen travel the world, in their efforts to keep their freedom and expose corruption and bring down villains – in as spectacular way as they can.

When I considered the original Now You See Me, I concluded that it was “worth seeing for the magical thriller as the stars try to evade the authorities but less so for the over-arching story behind the group.” Second time around, we end up with more of the over-arching story behind the group and a less coherent magical thriller.

In fact, last time, there were indeed thrills and plenty of magic – but this time, it’s more of an incoherently complex mish-mash of a plot – complete with an incomprehensible MacGuffin and US domestic FBI agents running around London, detaining suspects – and oddly, the magic is generally not really spectacular enough.

With the improving special effects on top of the existing tools of cinema, such as the simple cut, film-makers have to be all the more imaginative to impress with on-screen magic – and sadly, they fail to be dazzling enough.

Lula is admittedly introduced to us – and the Horsemen – with a rather spectacular illusion, but it’s seen only by Daniel Atlas, not by a public audience – and when she appears on the world stage, she does little more than pull doves from her coat. Much of the magic seems superfluous to the plot, rather than necessary to push it along. And the final trick is played on only a small group of people, while the global audience is in on the secret from the start, which seems to be a little backwards.

Many of the tricks are more sleight of hand or simply well-choreographed card-play than they are so-called magic but the action is briskly paced and the banter between the characters is entertaining enough – if not entirely convincing; despite being new to the group, the wise-cracking Lula is treated like an old-timer – and indeed, while being set up as potentially the most talented illusionist, we hear plenty of people talking about how great a magician she is, but don’t see enough of her in action. But rather than her illusions, the most awe-inspiring aspect of Lula is the combination of her short skirts and high boots.

And desperate as he clearly is to break away from his Harry Potter role, in another film about magic, Daniel Radcliffe, as a ruthless villain, is about as frightening as a bunny rabbit.