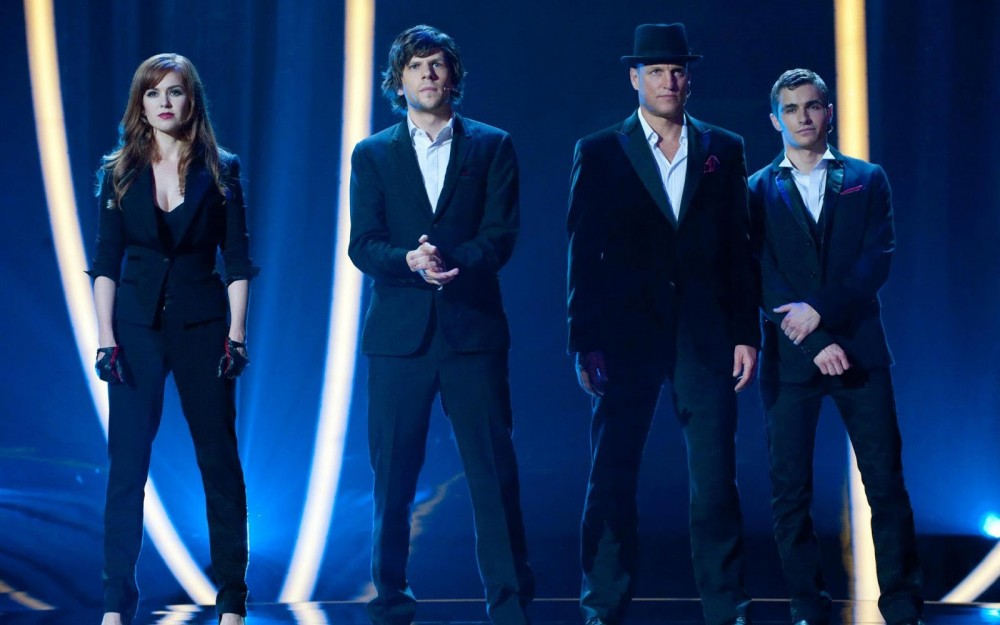 Daniel Atlas (Jesse Eisenberg) is an illusionist who likes to use the city as his stage. Merritt McKinney (Woody Harrelson) prefers to play mind tricks. Henley Reeves (Isla Fisher) is a stage escapologist. Jack Wilder (Dave Franco) is more of a street magician; the small stuff – picking pockets and locks.

The four come together when each receives a mysterious invitation to an apartment where they’re invited to work together on a big project, but despite all the tricks at their disposal, no-one knows who’s really pulling the strings.

Put four of the greatest magical minds together and you’re guaranteed an amazing show, but the Four Horsemen, as they now call themselves, are putting on bigger and better spectaculars.

When they appear to send an audience member from Las Vegas instantaneously to Paris to bring back millions of euros from a bank vault, the authorities get interested and Interpol officer Alma Dray (Mélanie Laurent) is sent from France to work with FBI agent Dylan Rhodes (Mark Ruffalo) to try to work out how the robbery was done.

A key ally in their investigation is famed sceptic Thaddeus Bradley (Morgan Freeman), whose life’s work is devoted to debunking so-called magicians.

Magic is no stranger to the movies. We had two films about magicians out together as recently as March and as The Incredible Burt Wonderstone showed, the biggest problem with magic in the movies is that it’s usually not magical.

Happily, the next addition to the genre hits the spot. On the sharpest form of his career, Louis Leterrier has conjured up a magical treat. Watching Now You See Me is as uplifting as watching a show by Derren Brown, Dynamo, David Blaine, David Copperfield or, dare I say it, even Paul Daniels. This film takes the magic seriously, which means we can enjoy it as a magic show, rather than the mockery that some previous films make of the art.

Anyone who enjoys magic knows it’s not real – the wonder is in how they make you think they’ve done it – and Morgan Freeman’s sceptic is a useful plot device to ensure that even though this is a movie, you can still get the same enjoyment out of trying to work out how the tricks are done.

But beside the magic, there are a couple of stories running along in the background; Will the authorities catch the Four Horsemen or will they disappear in a puff of smoke? Who brought them together in the first place and why?

The first is an effective thriller, pitting the wits of the cunning illusionists against the sceptical investigators. As the tricks get bigger and better, the Four Horsemen become bolder and the authorities become increasingly flummoxed.

The second is the film’s main disappointment. When you find out who brought them together and why, it’s unbelievable, unconvincing and far more of a let-down than being told the secret to a trick. Inevitably, with this, the smoke and mirrors render some of the characters involved in the revelations somewhat less satisfying.

But the structure of the film is that the magic and the thriller elements are so engaging and enthralling that you don’t really care why it’s all happening – you just care that it’s happening – consequently, when the denouement turns out to be a damp squib, it’s not such a problem, as you’ve long since forgotten that the film-makers have something else up their sleeve. You sit back and enjoy the ride and if it comes to a slightly shuddering halt, you still enjoyed the ride.

Whether it’s Jesse Eisenberg’s charming arrogance, Morgan Freeman’s cool superciliousness or Woody Harrelson’s cheeky showmanship, this is one of those rare occasions where while the stars are clearly having fun, so do we.