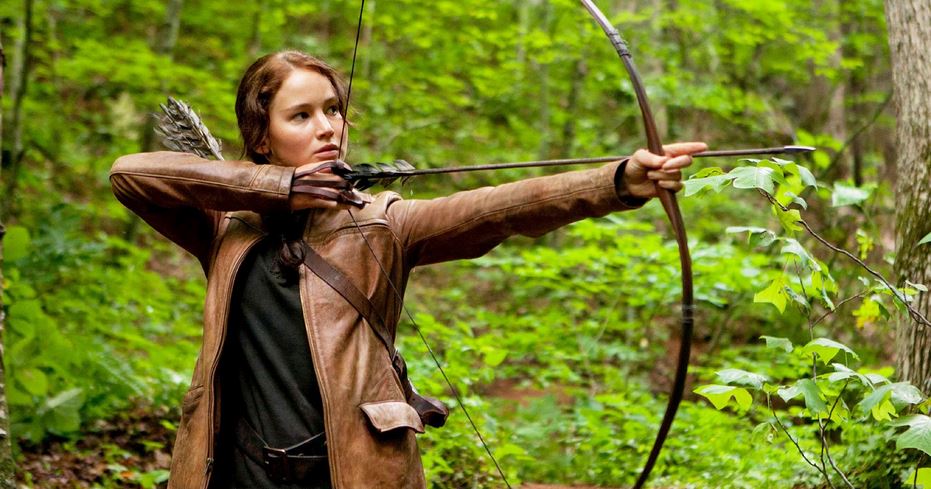 It’s seventy five years since the Capitol put down a violent rebellion by peasants living in the twelve outlying districts.

To remind the peasants who’s in charge, every year the authorities pick two teenagers from each district and stage a TV reality show that puts “I’m a Celebrity…Get Me Out of Here” in perspective; the twenty four contestants are in a battle for survival — only one of them will get out of there alive.

This year, the entertainment for the wealthy Capitol-dwellers begins even earlier than normal in District 12, when Katniss (Jennifer Lawrence) volunteers for the fight-to-the-death to protect her younger sister Primrose, whose name comes out of the lottery. The drama is further heightened when the other teenager from her district, Peeta (Josh Hutcherson) reveals that he’s been in love with her for years – but, of course, the rules dictate that only one of them can live.

With help from a previous winner from their district (Woody Harrelson), a wealthy socialite (Elizabeth Banks) and a stylist (Lenny Kravitz), the pair train to take on the strongest, fastest and most cunning contestants from the other districts in a brutal, televised fight to the death.

The novel by Suzanne Collins draws on movies and themes that any half cine-literate film-goers will recognise: a bunch of kids fighting to the death (Battle Royale, anyone?), everything being televised for a reality show (Truman Show, Ed TV for starters), cheesy, gaudy sartorial displays of wealth (the worlds of Brazil, The Fifth Element and many more) – and a political system that would put the wealth of Pyongyang versus the poverty and oppression of the rest of North Korea into context.

Admittedly, the target audience of young teens wouldn’t even have been up on two legs for many of the films this shamelessly steals from, less still would they have been glued to the news for the funeral of Kim Jong-Il, where-in lies the next problem: this film is so astonishly violent, it’s incredible that even with some cuts, it’s managed to shake off a 15 certificate, that would’ve banned anyone who’d heard of the book franchise from going to see it, in favour of a 12A. I’d like to meet the Hollywood creative with the nerve to think “I want to make a film for kids – I know, let’s have them brutally killing each other!”

It always seems frustrating, in such films, when we are dealing with twenty four teenagers fighting each other to the death, that we follow – and care for – only two. The other twenty two are little more than cannon fodder. You don’t suppose it’s going to come down to a stand-off between our two heroes, do you?

For an undiscerning audience, familiar with the books, perhaps there will be much to enjoy, but for anyone who demands a coherent story, this will leave you cold.

By virtue of the fact that the film is interested first and foremost in Katniss but also in Peeta, the denouement is sign-posted, nearly two and a half long hours before the end – or so you think. Suddenly, from out of nowhere, the contestants hear an announcement informing them of an unexpected rule change, followed by the information that “This will be the final announcement.” But it isn’t. We soon learn that we cannot rely on our predictions of what might happen, based on our knowledge of literary and cinematic narratives, because if they lead you in one direction with all the clues and then pull the rug from underneath you, there’s no point even thinking about the plot – there’s no point playing the game.

One of the film’s biggest crimes is it’s 143 minute running time. It certainly plays games with you until you’re hungry. It’s far too long for almost any film, not least one aimed at teenagers, especially since it takes well over an hour to get to Games themselves. There’s far too much time wasted on superfluous supporting characters – such as President Donald Sutherland and coach Woody Harrelson, whose advise is alternately obvious and counter-intuitive, as the plot requires at any particular moment. And most of the training session is not about improving their skills, but about looking good and appealing to the wealthy viewers (hence the need for Lenny Kravitz’s stylist). This, we’re told, is essential, because they need to win sponsors. But this apparently crucial plot sequence is almost entirely forgotten once the Games get under way.

The Hunger Games is an ultra-violent, derivative, overlong, formulaic yet incoherent, immature, lacking the satirical bite of its forebears – but based on a popular book series for teenagers, looking for something new after the Harry Potter and Twilight franchises have come to an end, it’s bound to fill enough seats to force us to have to sit through two sequels.

In the final scene – the one that sets up Part 2, of course – one character, on the train home, remarks “When we get home, we should forget about this.” Oh that we could.