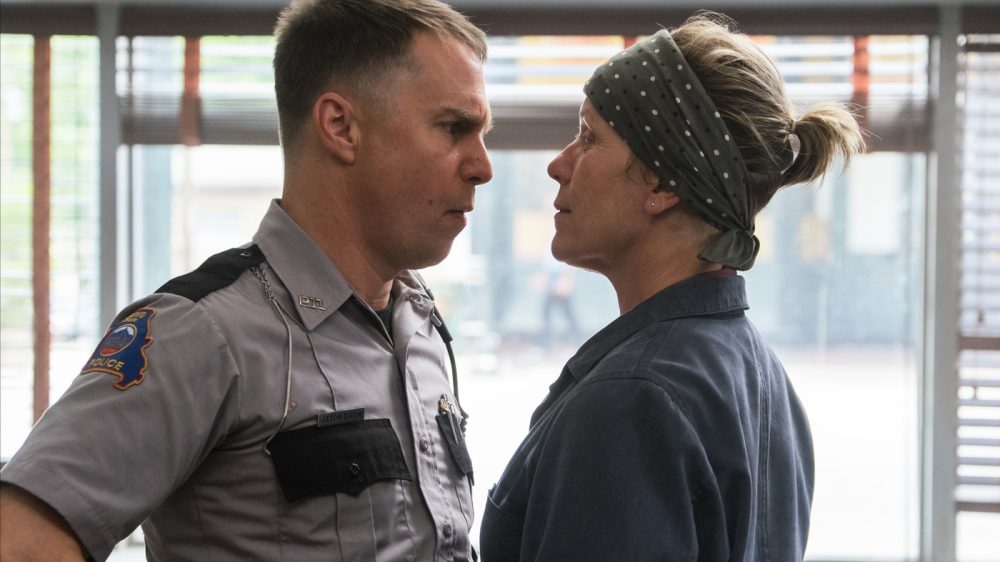 Some months after her daughter was raped and murdered, close to her home on the edge of Ebbing, Missouri, Mildred Hayes (Frances McDormand) is struggle to come to terms with the fact that there have still been no arrests.

Hoping to kick-start the local police into action, she rents three billboards, on a quiet road into the town, and displays a message, naming and shaming Chief Willoughby (Woody Harrelson).

While they sympathise with her loss, most of the town rallies around Willoughby, and while some politely ask her to remove the billboards, others – such as officer Jason Dixon (Sam Rockwell) resort to more threatening behaviour.

But Mildred can give as good as she can get and she’s not prepared to sit down on the sidelines until justice has been delivered for her daughter.

This is only writer-director Martin McDonagh’s third feature in a career that launched with In Bruges in 2008, but a Martin McDonagh film is always worth the wait.

This time, as a front-runner in awards season, expectations are particularly high and it’s easy to get caught up in a wave of adulation that isn’t quite deserved.

After In Bruges and Seven Psycopaths, you’d expect this clumsily titled drama to be bursting with acerbic and colourful dialogue, visceral violence and jet black humour – and on all those fronts, McDonagh delivers in spades.

The characters are compelling – possibly a little too compelling. Even Mildred’s ex-husband’s new girlfriend – who’s almost irrelevant to the overall story – is intricately drawn and fascinating and entertaining to watch. But by giving so many characters so much depth and complexity, it blurs the lines between good and bad to such an extent that the narrative loses its emotional core.

And given that the audience is meant to be on Mildred’s side, however much you feel for her and understand her frustration, you do get a sense that a woman that quick-thinking and self-assured might not have concluded that putting up embarrassing billboards would make evidence miraculously appear – and some of the lengths she goes to to protect her cause, while raising genuine, if uncomfortable laughs do little to engender empathy.

And while the moral ambiguity seeping through the veins of every last character is intellectually stimulating, it leaves you feeling emotionally bereft. Perhaps this nihilism is indeed his point?

In another year, Three Billboards Outside Ebbing, Missouri, might not have featured so dominantly at awards ceremonies, not least because there’s not really much of an underlying message, which is often required to drive awards recognition.

It’s a hugely entertaining – which isn’t usually a requirement at awards time – and very adult drama but the plot is, at times, contrived and lacking in direction. McDonagh has come up with an impressive vehicle for his talent, but he’s not quite sure where to drive it.