The distributors Entertainment One have been good enough to offer our UK readers (sorry foreign visitors) some goodies to coincide with the release of Now You See Me 2 – which returns the crime-fighting band of magicians known as The Horsemen for a sequel, three years after we met them in Now You See Me.

The FBI is on their tail as they travel the world, using their magic to try to steal a MacGuffin from some bad guys to try to expose some other bad guys.

With most of the original gang returning for an encore and Daniel Radcliffe joining the ranks of the villains, making another attempt to shake off the spectre of Harry Potter, the cast dazzle each other and the rest of the world with large-scale illusions, 90% of which the film’s magic consultant, TV hypnotist Keith Barry, insists can be done in real life. 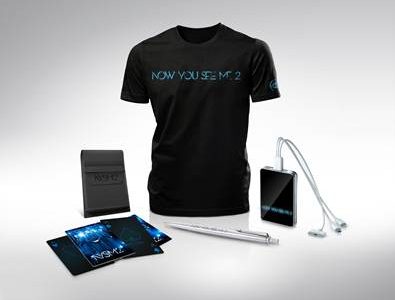 To win a gift pack including a T-shirt, a portable charger & a pack of Now You See Me 2 playing cards, among other goodies, go to What’s Worth Seeing’s facebook page (click here) and send us a private message with the answer to this:

Lizzy Caplan joins the team as the “girl Horseman” – taking over from which actress from the first film?

Now You See Me 2 is released in the UK on Monday 4th July 2016. We’ll announce the winners the following weekend.

The winners, who knew that Isla Fisher was replaced as the “girl Horseman” by Lizzy Caplan, were: