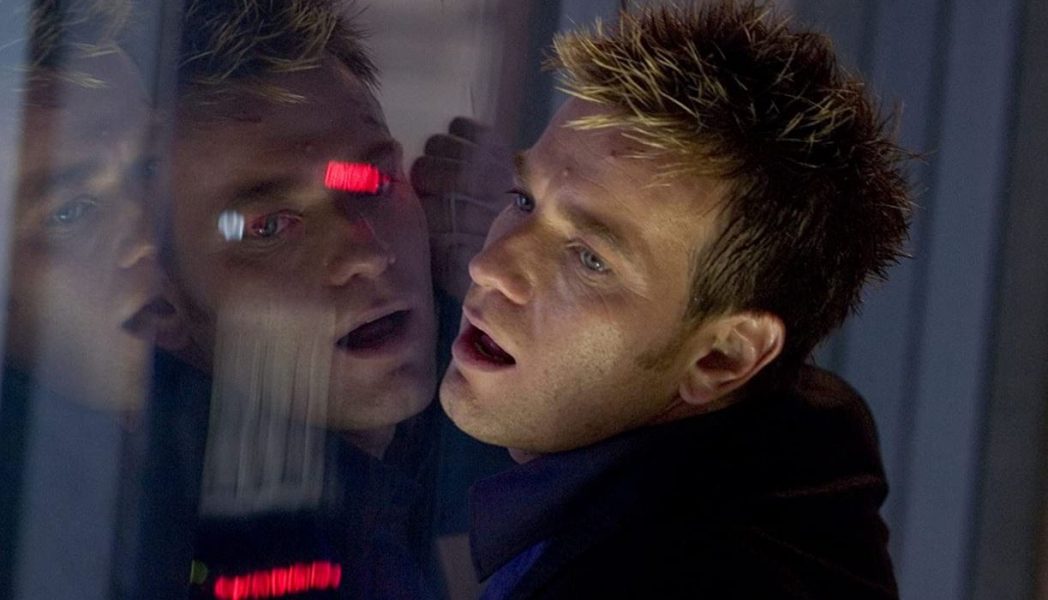 Lincoln Six Echo (Ewan McGregor) and Jordan Two Delta (Scarlett Johannson) live in a strange futuristic community where everyone wears matching jump-suits and the men and women are kept apart – except for dinner time, when their nourishment is regulated by an unseen authority.

They do mindless production-line jobs and their only reason for living is a regular lottery whose top prize is a ticket out of that mindless existence to the utopian eponymous island.

Lincoln discovers that all is not what it seems: all the inhabitants are clones of wealthy people in the real world, being farmed for their organs, and the lottery is a way of getting clones out of the system and to the operating table, without arousing the suspicion of the others.

When Lincoln manages to escape, taking Jordan with him, the head of the institute, Merrick (Sean Bean) sends out a search party.

Can Lincoln and Jordan make it on their own in the real world, with fire-power of a group of ruthless bounty hunters on their tail?

This is something Hollywood does all too often – a wasted opportunity. The basic idea of a clone-farm raises so many interesting topics for discussion, especially at a time when cloned dogs are hitting the headlines and the government’s consulting on designer babies.

But it loses the courage of its convictions and rather than truly examining these themes, it degenerates into your typical loud, violent, chase thriller — and it’s overly long, to boot.

Variously during the film, we are told we’re in 2019 or 2050 – neither date seems likely when you look at sets and the props. Take the transportation, for example: the cars and lorries are very similar to those we drive today, only slightly more curvy; the trains float a foot off the ground and are powered by little jet engines; the trams travel on wires at roof-height and there’s one rocket-powered “bike” which flies around like something Spiderman’s foe, the Green Goblin might use.

Then it’s full of continuity errors and incoherent notions: when there’s a security breach in the most crucial part of the cloning complex, the boss goes there on his own; the way the clones are named is inconsistent; the “real world” Lincoln is already ill – so why hasn’t he ordered any organs yet – and if a customer does need an organ, is it just taken out, leaving the rest of the body – and its organs – to perish – that would all seem a bit of a waste. Then the institute has another sideline in baby production, which doesn’t seem to fit in with the way anything else works there.

It doesn’t really say much for a film when the best things you can say about them are that the production design is impressive (if inconsistent) – the vision of a future LA, with odd appendages atop familiar buildings is certainly interesting. That said, the interior of the institute, while spectacular, is derivative of a whole host of films, from Soylent Green to THX 1138 and Logan’s Run.

Some of the best moments – thinking about the humour and the special effects – come from when Lincoln meets his owner – an American accented McGregor converses with the “real life” Scottish accented version of himself – the wealthy power-boat builder who commissioned him.

Steve Buscemi sleep-walks through his all-too-brief cameo. Almost every brand in the Western hemisphere – from bottled water to restaurant chains and trainers – get more screen-time in a film with more blatant product placement than any in recent history.