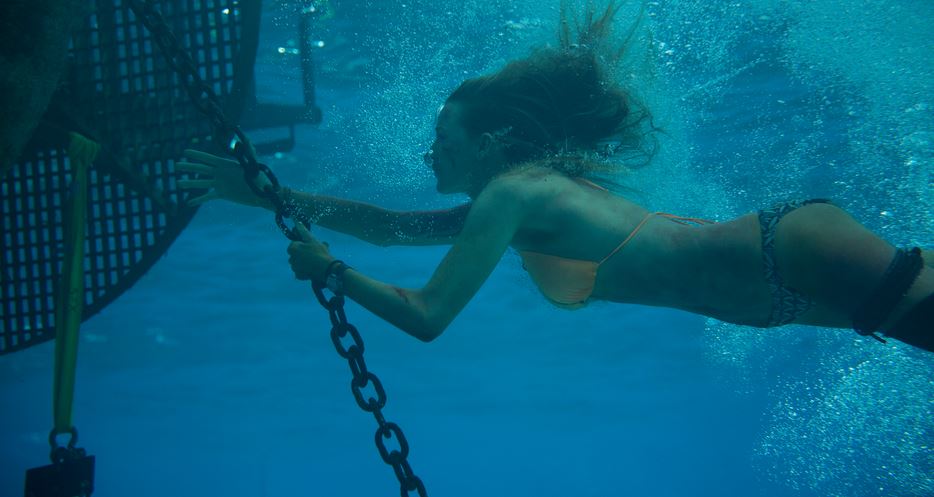 Former medical student Nancy (Blake Lively) is surfing at a secluded beach in Mexico when she encounters a fierce great white shark.

She finds refuge on a giant rock, two hundred yards from the shore, but with the tide rising and the deadly predator circling, it’s a race for survival.

If you are expecting a female version of Jaws then you may be in for a major disappointment because this is a B movie styled thriller aimed squarely at hormonal fifteen year old boys.

So Blake Lively, looking extraordinarily svelte and lithe just eight months after giving birth to her first child, spends ninety-nine percent of the film in a skimpy bikini and half a wet suit with the camera lingering on her pert derrière and her crotch as her character fights for survival after being attacked by a CGI shark.

Lively carries the movie compellingly with a superlative performance. Fortuitously her character’s medical training comes in handy when the attack leaves her with a massive bleeding wound on her leg. (Cue close ups of her horrific gash along with her nether regions) Her attempt to stop the bleeding by sewing up her leg with the aid of her earrings is one of the most gross out and wincing moments in the film.

She is also able to fix the broken wing of a seagull, she names Steven (Seagal get it?), who keeps her company on the rock which is too ridiculous for words.

Spanish director Jaume Collet-Serra (Non-Stop, Unknown and Orphan) is adept at keeping the action taut and tense. However at no point did I think Lively wouldn’t make it, in contrast to her husband Ryan Reynolds in the extraordinarily heart stopping and claustrophobic Buried, in which he spends the whole film in a coffin.

Shot in the exquisitely stunning paradise of Lord Howe Island in the Tasman Sea between New Zealand and Australia, which doubled up for an idyllic Mexican beach, the cinematography by Flavio Martinez Labiano (Non-Stop and Unknown) is breathtaking.

Frankly, Lively deserved better than this sexist exploitative horror which will have spotty teenagers perving over her, plus it is also borderline racist as it is only Mexican locals who end up as shark bait while even the white seagull lives to fight another day.

Personally I would give this a miss and just watch Jaws instead.