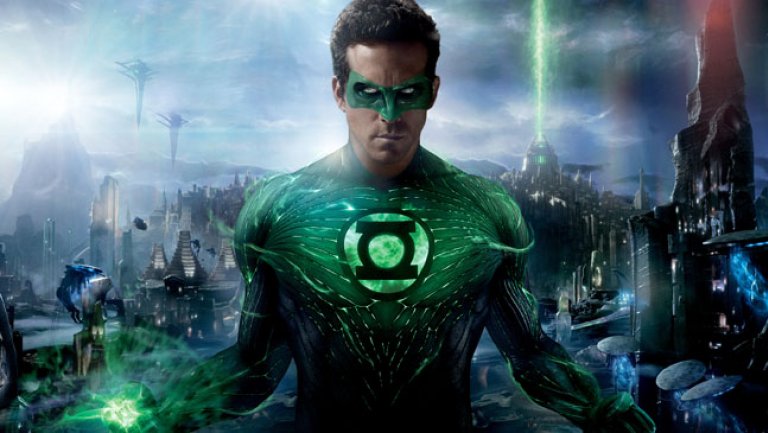 Hal (Ryan Reynolds) is America’s greatest fighter pilot and he’s hired by his ex-girlfriend Carol (Blake Lively) and her father to show off a new piece of military equipment they’re trying to sell to the US military.

Putting pride ahead of professionalism ensures that things don’t quite go to plan, but the consequences pale compared with what happens next…now, bear with me: a big green ball of energy picks him up, flies him to the coast, where an alien lies dying in his crashed space pod. A glowing green ring floats over to him. This ring gives him the power to create anything he thinks of out of green energy and turns his skin into a cool, green super-hero outfit.

The ring has chosen him to be part of a universe-wide police force called the Green Lantern Corps, which is fighting for its very survival because one of its elders has defected to the dark side – or, in this case, the yellow side.

This elder, who’s morphed into an all-powerful, soul-sucking, giant, tentacled beast known as Parallax (voiced by Clancy Brown) is marauding across the universe and now heading to Earth to devour the planet.

After falling foul of his Green Lantern colleagues, led by the red-skinned Sinestro (Mark Strong), he tries to persuade them to help him protect Earth from Parallax. Meanwhile, back on Earth, an eccentric, loner of a scientist, Hector (Peter Sarsgaard), has developed super-powers of his own, which he uses to try to bring Hal down.

Can Hal fight off Hector, protect the world from Parallax, save the integrity of the Green Lantern Corp…and win back Carol’s heart?

With DC and Marvel competing to bring their comic-book heroes to the big screen, this is an own goal for DC.

They’ve rounded up a host of recognisable names – some of whom (Geoffrey Rush, Michael Clarke Duncan) are just voicing up computer-generated aliens – thrown in a misunderstood fighter pilot and his powerful but sexy ex-girlfriend, a crazy scientist, his smarmy senator father (Tim Robbins), a travelogue of colourful alien worlds, mixed in far too many characters and an incomprehensible plot and – of course – topped it off with some 3D.

It’s a recipe for a sloppy mess.

Rarely has there been a super-hero with such ill-defined powers. Superman is strong, can fly and has extra sensitive senses – Spider-Man can fling webs – Batman buys himself expensive gadgets – the Green Lantern creates anything he can think of out of green energy; a helicopter is about to crash, so he creates a roller-coaster, of course.

Although the special effects team have clearly been working overtime, they didn’t have much to work with – certainly not any kind of a coherent script – even two-time Bond director Martin Campbell can’t rescue this mess.

To anyone unfamiliar with the Green Lantern legend, this film will make no sense – but to those who know the oeuvre inside out, it’s on a knife edge – it might offer them a big screen experience they’ll enjoy, but it could equally be an insult to their comic of choice.

It is also guilty of the biggest crime that a film this unnecessary can commit – it’s too long. There are far too many scenes that add too little or even confuse matters even further.