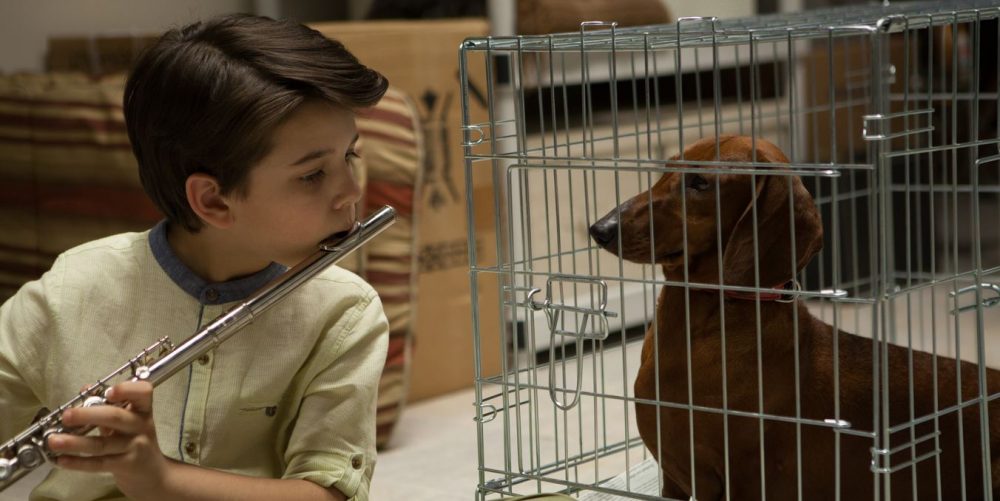 Husband and wife Danny (Tracy Letts) and Dina (Julie Delpy) hate each other. The only love in their lives is their melancholic cancer-survivor son, Remi (Keaton Nigel Cooke). Danny tries to introduce some life into the family by bringing a dog – the eponymous sausage dog – into the house. Remi is entranced, but Dina – haunted by memories of how her own childhood dog was raped – is less enthusiastic about the new family member.

Wiener dog ends up at the vet’s and assistant Dawn (Greta Gerwig) decides that rather than let her undergo the procedure she’s been sent there for, she’s going to run away with her. While buying pet food, Dawn bumps into an old school friend, Brandon, (Kieran Culkin) and ends up going on a road trip with him.

Long-since faded screenwriting lecturer Dave Schmerz (Danny DeVito) is mocked by his students, patronised by his colleagues and ignored by his agent. His only solace in life is his sausage dog.

And when Zoe (Zosia Mamet) takes her artist boyfriend Fantasy (Michael Shaw) to see her cantankerous grandmother (Ellen Burstyn), it soon becomes clear that the purpose of his visit is neither to reconnect with her estranged Nana – or to meet her new dog.

Todd Solondz hasn’t made many films in a career that’s spanned more than 2 decades, but when he does turn one out, a small but loyal cohort of fans are waiting like coiled springs to see whether he can match the indie heights of Welcome to the Dollhouse, Happiness and Storytelling.

On this occasion, he revisits many of the themes he’s visited before – nihilism, mortality, dysfunctional families to name but three – and happily has fresh things to say about them.

Faultless performances from a varied cast – including the dog – provide an insight into the acerbic mind of a man who refuses to confirm and ensures that his characters refuse to do likewise.

Julie Delpy’s recollections of her childhood dog, while tremendously cruel to her son, provide an opportunity for a young boy, and a cancer survivor at that, to put mortality and responsibility into context. Greta Gerwig – reviving the young lead character of Welcome to the Dollhouse, without it being in any way necessary to have seen it to understand this story – paints a familiar picture of a positive young woman, looking for love and meaning in her life. Danny DeVito, as a the archetypal “if you can’t do…teach” screenwriter, delivers an unusually downbeat but no less empathetic turn in a satire on the industry that Solondz has done his best to avoid through his indie status. And the interplay between Zosia Mamet and her grandmother, Ellen Burstyn, is by turns heart-breaking and heart-warming.

But Wiener-Dog is, really, shamelessly four short films with little effort to link them into any coherent narrative. Indeed, even the eponymous mutt doesn’t act as any kind of constant throughout the film; the press notes talk of four sets of people who all interact with the same dog. The first two stories clearly involve the same Wiener, but quite how the next two tales could feature the same dog is open to question. Perhaps it doesn’t really matter. But while the dog acts as a catalyst for the plots of the first two segments, it serves only as a punchline to the second two, whose messages could have been imparted without the dog altogether.

There are also times when it feels like Solondz is stretching a point – or stretching reality – just to get a reaction. There is strong language and shocking visuals – there are astute observations and thought-provoking dialogue – but too often, it feels arch; the best parts of the film often feel forced into a sausage-dog-shaped hole that doesn’t quite fit the stories around them.

On their own, each of these short films would be watchable. But with no thematic continuity and little narrative coherence, we’re left thinking that Solondz might have been better waiting until he had enough to say about a particular subject and made a feature-length film about that – or at the very least, put a little more effort into explaining how a single dog can be travelling through these four stories – and what relevance that might have.

Sadly, as well-written and performed each segment is, the overall experience doesn’t live up to the sum of its parts, leaving a slightly disappointing taste in the mouth of all but the least judgmental fans.