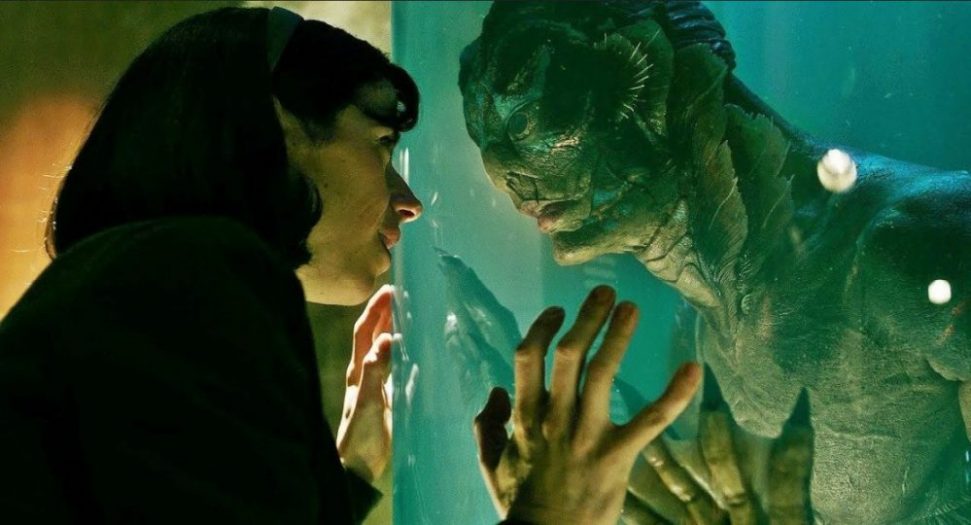 In the 1960s, Elisa (Sally Hawkins) is a cleaner at a secret US government defence facility. She’s mute and her only friends are her neighbour Giles (Richard Jenkins) and colleague Zelda (Octavia Spencer).

When a strange “amphibian man” (Doug Jones) is brought into the facility, security is stepped up. The facility’s ruthless security chief Richard Strickland (Michael Shannon) is under pressure to keep the specimen safe for General Hoyt (Nick Searcy) and a group of scientists, led by Dr Hoffstetler (Michael Stuhlbarg).

No-one is allowed anywhere near the creature’s tank except the scientists and the cleaners…and it doesn’t take long for the gentle Elisa to tame their savage guest and develop an unspoken bond with him, as they stare longingly into each other’s eyes, separated only by a secure tank and heavy chains.

When she finds out what the authorities are intending to do to the creature, Elisa decides she has to set him free.

But how can a lowly cleaner, who can’t speak, outwit a heavy-handed security chief with his own reputation on the line?

Guillermo del Toro is not known for romances but whimsical fantasies certainly feature prominently among his previous works, and this could certainly be described as a whimsical romantic fantasy.

Beautifully shot with a green and blue hue, apposite for a film about a river creature, del Toro presents s a perfect sense of the period – from the costumes to the cold-war paranoia and the passion for big gas-guzzling cars. And his use of that rarely seen blend of retro and science fiction worked effectively.

Sally Hawkins has received the most praise for her role – and it’s certainly not easy to deliver such an impassioned performance without speech. Richard Jenkins and Octavia Spencer also find themselves nominated for Academy Awards in the Shape of Water landslide, but while they are perfectly tender and supportive, their roles don’t have that Oscar-moment that screams out for recognition.

The real monster in this creature-pic wasn’t Doug Jones’s “amphibian man” – physically resembling his character in del Toro’s Hellboy – but the fearsome Michael Shannon. His neurotic and desperately angry security chief has been surprisingly overlooked this time, for a performance every bit as powerful and intense as earlier roles that have seen him up for awards.

The main problem for this film is that ultimately, while it’s stunning to watch, it leaves you emotionally rather cold. While Elisa feels that this creature is the only one who doesn’t judge her for her inability to speak, that doesn’t translate into a feeling of true love.

It works better on the level of an ET for the 21st century – with a twelve year old boy replaced by a mute adult woman.