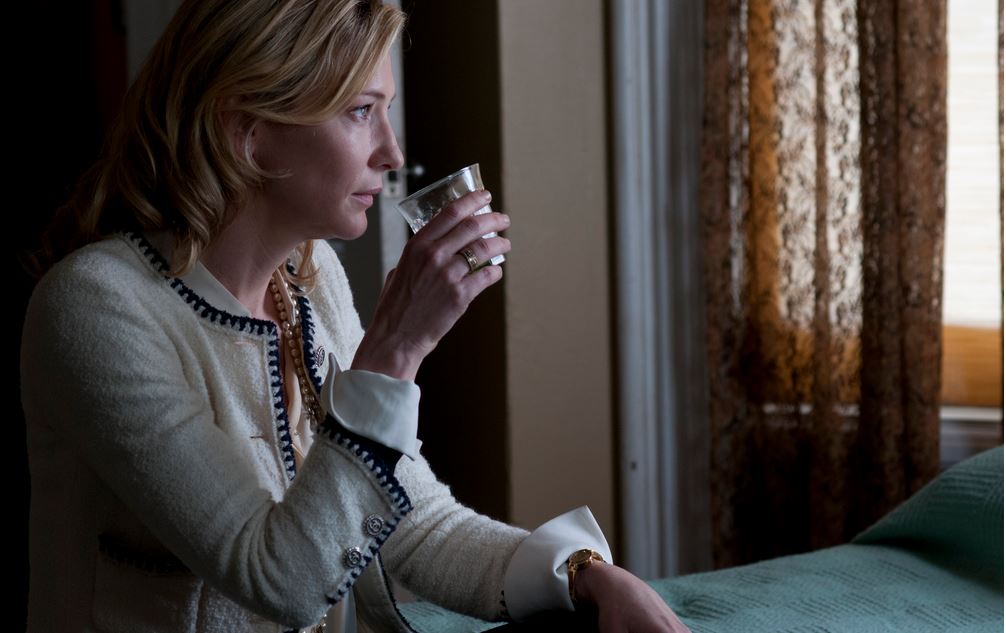 Jasmine (Cate Blanchett) was a wealthy New York socialite, the wife of one of Manhattan’s wealthiest investment billionaires, Hal (Alec Baldwin). But no longer. After he was exposed as a Bernie-Madoff-style fraud, Hal killed himself in jail, while Jasmine was left destitute.

Without even a roof over her head, she heads to San Francisco to stay with Ginger (Sally Hawkins), the working class sister she’d previously shunned as worthless. Now, Ginger is Jasmine’s only hope of survival.

Trying to start a new life on the West Coast, Jasmine has a go at working for the first time in her life – as an assistant to dentist Dr Flicker (Michael Stuhlbarg) – and has another stab at love, with diplomat Dwight (Peter Sarsgaard) – but her past and her present seem to conspire to ensure that nothing she tries goes to plan.

Even Jasmine’s efforts to rebuild her relationship with her supportive sister rebound in her face, when she fails to accept Ginger’s charity with any grace and her own well-intentioned efforts to persuade Ginger to move on from the boyfriend she sees as a loser (Bobby Cannavale) has unexpected consequences.

A growing reliance on alcohol and a refusal to accept her lower status do nothing to help her adjust to her new life.

The plot of Woody Allen’s latest feature reads like a tragedy and it is indeed the story of a woman’s breakdown – her descent from purgatory to hell. But Allen’s skill is to inject an element of farce into the tragedy, lightening our journey if not Jasmine’s.

There are glimpses of Allen at his best here – and indeed Cate Blanchett delivers a performance that rates among the very best of her own highly accomplished career. Other supporting actors, including Sally Hawkins as Ginger and Andrew Dice Clay as her ex husband are particularly impressive. Perhaps the most interesting character is Bobby Cannavale’s Chili, a blue-collar worker with a heart – and a temper. The acting is universally strong, although Louis CK and Peter Sarsgaard feel a little flat, compared with some of their previous roles.

A peculiar thing about Blue Jasmine is that despite filling the screen with a plethora of sympathetic and likeable characters, Allen centres his story on the least sympathetic character of them all. In all manner of senses, Jasmine is the author of her own destruction and the further down she goes, the more she keeps digging and rather than feeling sorry for her, we kind of feel that she deserves it.

The story-telling is skillful enough, with a combination of present-day narrative and judiciously used flashbacks to reveal what we need to know, when we need to know it, for the utmost dramatic effect.

But there’s also a degree of cinematic complacency, with much of the plot unfolding like a perverse fairytale – too many coincidences, caricatures and contrived dialogue to feel like we’re genuinely in the real world, watching a real woman self-destruct.

There is, of course, no reason that we should expect a Woody Allen film to have a happy ending – even one whose tragic traits have been moderated by many light touches – but the denouement does leave an unexpected and unnecessarily sour taste in the mouth.

Bittersweet is frequently used to describe something that’s at various times both bitter and sweet – often in that order – it has it’s bitter bits but ends up veering towards the sweet. Without wanting to give anything away, Blue Jasmine could better be described as sweetbitter.

The film is a success, but that’s more down to the performances than the story-telling. It’s entertaining in its own right and well above his nadir, but while hinting at what Allen can do, it’s more teasing than pleasing.