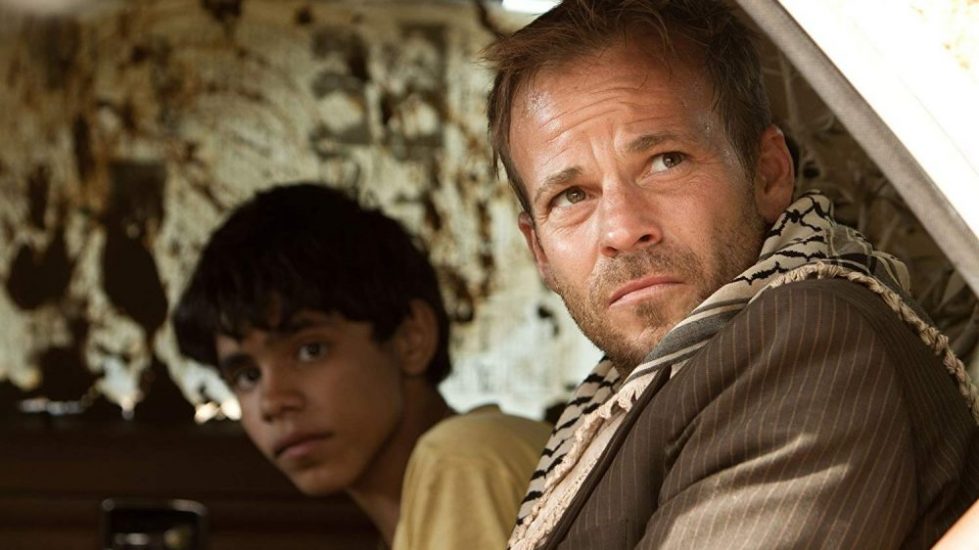 In the early 1980s, Israeli fighter pilot Yoni (Stephen Dorff) is shot down during a bombing raid on a Palestinian refugee camp in southern Lebanon.

A group of Palestinian fighters capture him and hold him hostage. One by one, the gang members take it in turn to guard their captive. One day, a young boy Fahed (Abdallah El Akal) – who’s father has just been killed by an Israeli bomb – is left with the prisoner.

Fahed craves vengeance, but can’t bear to see the cruelty directed at the prisoner and begins to conceive a plot to help Yoni help him; perhaps he can bargain with the prisoner that if he helps him escape, he will help him fulfil his father’s dream – to plant his olive tree (the Zaytoun of the title) at his ancestral home – a small Arab village that’s long since been part of Israel.

This film is trying to do many things, but it works considerably better as a boy’s own tale of heart-stopping adventure and derring do than as any kind of a political statement about the situation in the Middle East.

From Fahed’s point of view, it’s a coming-of-age story about how a young boy who mindlessly takes orders from the adults around him decides to take the initiative for once and uses a situation to his advantage, to try to fulfil his father’s dream to plant his olive tree at his ancestral home; from Yoni’s point of view, it’s a story about how a brave soldier escapes captivity and tries to make it home safely through hostile territory, while learning, on the way, to respect his enemy.

But for both, it’s a long journey, and although the film is made by an Israeli, it takes long time before the soldier becomes at all likeable – while it seems that he’s been set up to be the wronged hero of the piece – can the captured soldier make it home alive? – his bravery and cunning initially come across as deviously taking advantage of a naïve young boy. The young Palestinian is considerably more sympathetic than the Israeli captive, who’d stand no hope of survival had his fate remained in the hands of adults.

At times, their journey – the soldier’s home and the boy’s to his spiritual home – is gripping, but rarely is it truly believable. Many of the obstacles they encounter along the way generate drama, but often stretch credulity somewhat. That said, it’s interesting that before long, the audience is routing for an Israeli soldier and his young Palestinian travelling companion, as Israelis and Arabs alike are trying to halt their odyssey.

A film about a microcosm of the Middle East conflict might not seem to have particularly broad appeal but it’s made all the more accessible by the casting of a recognised – if not A-list – American star and the fact that English is, for many in the region, their only shared language, enabling that accessibility to be extended with a degree of authenticity.

The film is clearly trying to say that if these two protagonists can put aside their differences, it shouldn’t be that difficult to find a peaceful resolution to the centuries old Middle East conflict. It’s perhaps most notable that while the film leaves us with a seed of hope that these implacable enemies might one day be able to find some kind of an accommodation if they could only learn to see each other as regular people, the fact that it’s set thirty years ago and a resolution to the situation seems to be as far away as ever makes its message seem all the more naïve.

All of which makes Zaytoun seem a little simplistic in its ambition with a message no more profound than “wouldn’t it be nice if we could all just get along?” Of course it would, but we live in the real world. Perhaps, though, it’s heart warming to step out of the real world for a little harmless escapism, once in a while.