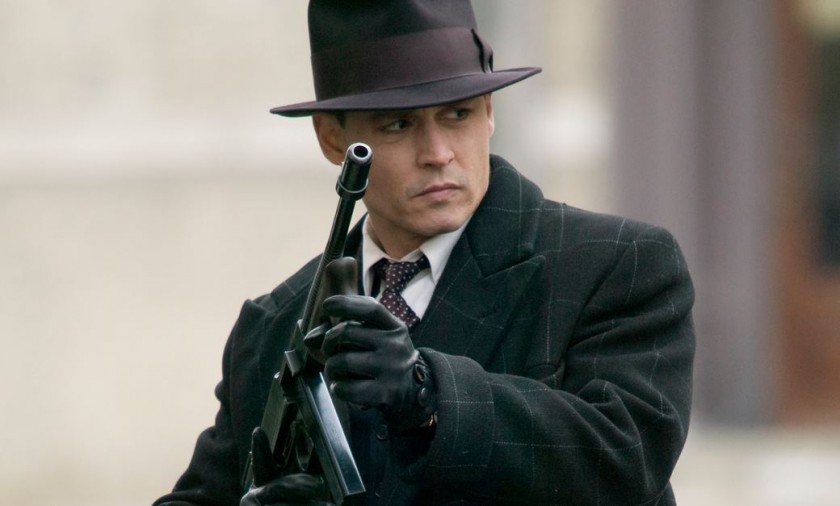 In Depression era Chicago, things were financially pretty rough for most people – but not for John Dillinger (Johnny Depp).

When he meets coat-check girl Billie (Marion Cotillard) at a club, his attitude towards life changes – suddenly, money and the thrills of stealing it are no longer his top priorities.

But it was round about this time that J Edgar Hoover (Billy Crudup) was struggling to persuade Congress to fund his new, nationwide Bureau of Investigation, and he felt that securing the collar of a criminal of Dillinger’s calibre would boost his chances.

So he hired renowned and determined crime-fighter Melvin Purvis (Christian Bale) to lead a crack team to bring in Dillinger and his gang, including Pretty Boy Floyd (Channing Tatum) and Baby Face Nelson (Stephen Graham).

With Hoover on his case, Purvis on his back, Billie at his side and his cronies all in tow, Dillinger’s already dangerous life has just got considerably more challenging.

There are a few touches of the Michael Mann brilliance that we’ve seen in previous films, from Manhunter, though Heat to Collateral, but this isn’t one of his strongest works.

It’s very much centred on Dillinger – which isn’t a problem per se, as Depp is as bankable as ever – but we don’t really get a sense of the other interesting characters in his gang, such as Baby Face Nelson and Pretty Boy Floyd, who are skimmed over as they go as quickly as they came.

Christian Bale’s Purvis is also little more than a cardboard cut-out, through no fault of his own, and one of the more interesting individuals of the period – a pre-FBI J Edgar Hoover – is almost ignored after the first scene.

One of Mann’s weaknesses is women, and that doesn’t really change here – Cotillard’s Billie is an unusually strong woman for Mann, but while she acquits herself tremendously against the gangsters, the relationship between her and Dillinger doesn’t convince – it builds up too strong and too quickly and then doesn’t really go anywhere.

The plot is a bit jumpy and contrived at times and doesn’t flow as well is it might.

There’s been some criticism of the technical aspects of this film – but when you’re dealing with agents stalking gangsters at night, a slightly grainy look isn’t as off-putting as has been suggested. But there are some odd directorial choices, such as an awful lot of shooting from the hip – inexplicable staring up at people’s chins.

In summary, there’s more attention paid to the less interesting characters and there’s little real emotion, but no expense has been spared on the authentic period costumes, sets and cars and the stylish set-piece gun-battles and bank robberies, while not a patch on Mann’s work in Heat, are convincingly impressive.