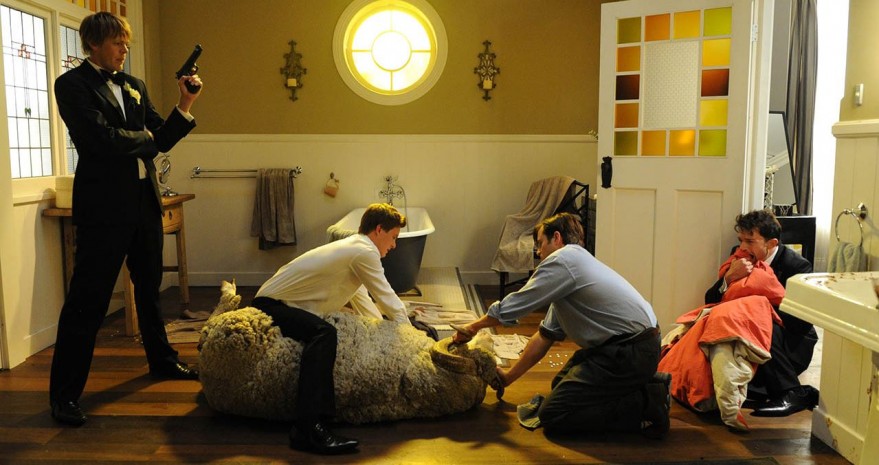 Twenty-something David (Xavier Samuel) and Mia (Laura Brent) meet on holiday on a deserted island, fall desperately in love and decide to get married.

Just to complicate matters, Mia is the daughter of a straight-laced, conservative (small C) Australian senator (Jonathan Biggins), while David is a slacker with no family and only three eccentric friends; drugged up party-boy Tom (Kris Marshall), heart-broken Luke (Tim Draxl) and geeky Graham (Kevin Bishop).

Shocked by the news of David’s engagement, the lads agree to fly across the world with him to be his “best men” at Australia’s society wedding of the year.

But despite promising to be on their best behaviour, it seems that almost no embarrassment is beyond the reach of the British boys, out of their depths among the great and the good of Australia; before the end of the night, drugs, alcohol, firearms and a transvestite sheep are just some of the things that conspire to make David’s day to remember a nightmare to forget.

With every shot, with every line of dialogue, A Few Best Men plunges deeper into the mire of the worst that the film industry has to offer.

However embarrassing David’s friends are to him, this shameful excuse for a feature film is more embarrassing to anyone in the British or Australian film business who have strived to get their own projects off the ground.

In tone, this is feels close to another Kris Marshall-led film, Death at a Funeral, which – it turns out – shares a producer, who must surely be thanking his lucky stars that people are still giving him money after that mess. Maybe the won’t again after this.

This is one of those peculiar productions that will make you laugh from time to time – but any laughter will most likely be to hide your own embarrassment at the incoherent plot, the immature dialogue and acting that belongs on a TV sketch-show. The moments that most closely resemble true humour seem to be borrowed from the Farrelly brothers, long after their peak.

It’s contrived, obvious, painful to watch – but it never quite reaches the “so bad it’s good” status it would need to become a cult-classic, settling into the “so bad it’s bad” rut that will most likely confine it to the bargain DVD bin at the pound shop – if it’s lucky.

If the idea of a ram wearing lipstick with a bra stretched between its horns, an outdoor wedding being flattened by a spherical hedge rolling down a hill, jokes at the expense of a fat girl or arms buried to the elbow up a sheep’s backside are the kind of things that make you laugh, then you might think I’m being unfair – but there’s nothing clever about the intricately structured set-pieces that can be seen coming a mile off, and the performers simply don’t have the skill to polish this turd.

The casting doesn’t help – with Olivia Newton-John unconvincingly playing Mia’s recovering alcoholic mother and at more than a decade older than Xavier Samuel, Kris Marshall is – and looks – far too old to be playing the groom’s best friend. Tim Draxl should be told that waving a bottle around, slurring your words a bit and walking heavily on your feet does not a drunken love-lorn reject make; his misery could have clashed effectively rather than jarred horribly with the central love story. Only Kevin Bishop and his portly female companion (Rebel Wilson) make brave attempts to do the best with what they’re given; they’re clearly the most, or only talented sketch-comics involved in the project.

For this kind of film to work, two things need to be the case: the characters have to be likeable – none is, particularly not the weak and whiny protagonist – and while surreal situations have tremendous comic potential, the film as a whole has to be pushing the boundaries of reality; it should feel like at least some of the events could happen, but nothing portrayed here feels even remotely possible, let alone likely. The closest it comes to believability – such japes as luggage being accidentally swapped or a crazed drug-dealer turning up unannounced at the wedding – are poor recreations of scenes that have been done to better effect so many times before that they just feel lazy.

Everyone in the film clearly had fun making it – the director even gave himself a cameo – but while the old maxim about the film industry is that “nobody knows anything,” one thing any producer should know is that you need the best you can find; the best writer, the best cast, the best director – you need a few best men. They clearly weren’t available.