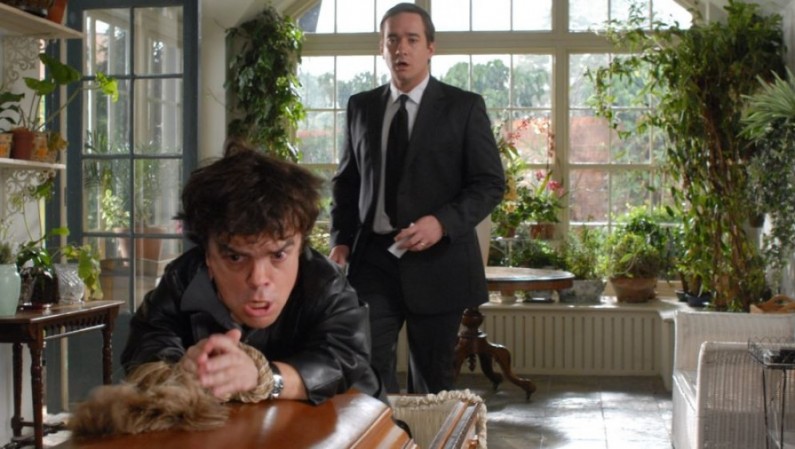 Daniel (Matthew Macfadyen) is preparing his home for the funeral service of his father when the body turns up – it’s the wrong body. Ha ha. You get where this film is going.

When the right body finally turns up, an array of wild and crazy friends and family turn up to pay their final respects. As does one man no-one recognises, and if you’d seen an American dwarf (Peter Dinklage) before, you’d have remembered him.

When Daniel discovers why the mystery guy has turned up, all hell breaks loose. The secret can’t get out; the family couldn’t stand the embarrassment. But how can they stop the secret getting out? The clue is in the title…

Oh dear – what on earth is Frank Oz doing? With films including Dirty Rotten Scoundrels, Housesitter, Bowfinger and The Score on his CV, he is clearly a film-maker who knows how to tell a story – both comic and otherwise – but this film dies on its feet and should be buried before anyone wastes their time and money seeing it.

At times it’s fun, but not in a clever way. And it’s always corny, predictable with far too many stereotypes.

On those rare occasions that they latch on to a decent joke, they milk it for too long.

One of the few likeable characters, Howard, is no more than Andy Nyman’s shameless attempt to impersonate Ricky Gervais.

It’s a small story, in a confined space, which would perhaps have been more comfortable on stage, but it certainly doesn’t jump off the screen as it needs to.

I hope this is not a sign of the direction the British film industry is going in, wasting money and undoubted talent like this.

I’m giving in to the same corny urges as the film makers to warn you that this is about as funny as death and as appealing a way to spend an hour and a half as a funeral.