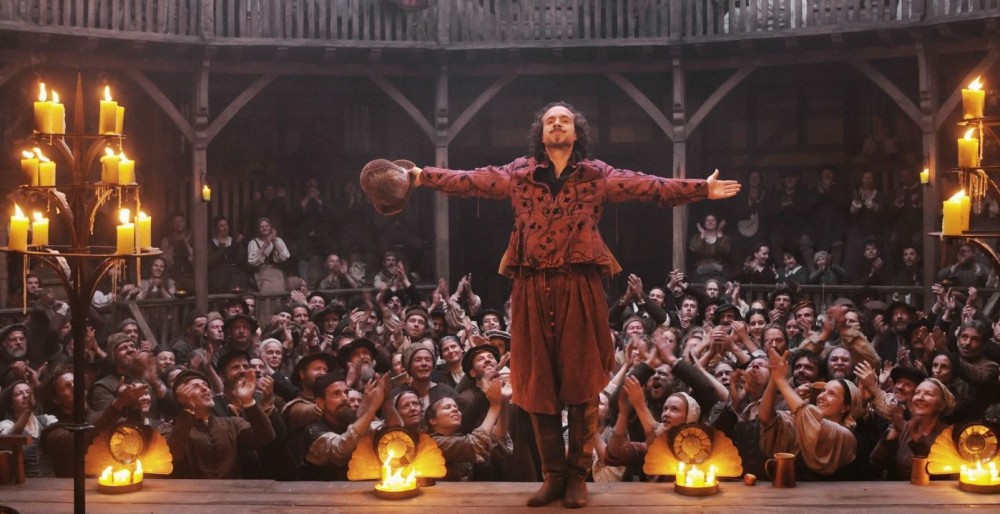 As she neared the end of her long reign, Queen Elizabeth the first (Vanessa Redgrave) had no sons – none that she could tell anyone about, anyway.
Her chief advisor William Cecil (David Thewlis) knows more about her past indiscretions than she does, having despatched a handful of illegitimate children to the shires – among them, the son of nobelman Edward De Vere, the Earl of Oxford (Rhys Ifans) who would strictly be the next in line to the throne.
Elizabeth fell for the much younger De Vere years earlier when she watched and enjoyed a play he’d written – but as he got older and assumed the responsibilities of a nobleman, he could no longer be seen to be a man of words, in a court led by Cecil, who feared the power literature could have on the people.
But De Vere was still writing on the quiet – he just couldn’t publish under his own name. In his efforts to find another writer to publish his bitingly satirical plays, the best he could come up with was a lowly, self-publicist of an actor called William Shakespeare.
As Cecil’s grip tightened on Elizabeth’s court and fears grew over whether the throne would have to be handed to James of Scotland, De Vere’s plays became more succesful and Shakespeare enjoyed increasing fame.
But as De Vere’s son looked increasingly likely to be revealed as the rightful heir to the English throne, his cover as the true writer of the plays attributed to Shakespeare is threatened, potentially undermining his political ambitions. And Cecil’s continued plotting to get one of his own family members on the throne further weakens De Vere’s position.

This is perhaps not the kind of subject matter you might expect to see from the director of Independence Day, Godzilla, The Day After Tomorrow and 2012, but that being the case, Roland Emmerich certainly manages to take the bard’s words off the page and turn them into a big film.
The scale of the sets – and set pieces – is more dramatic and cinematic than you might expect in a film about a writer.
Much of the press about Anonymous has understandably been about the controversy over how it challenges Shakespeare’s authorship of the works that bear his name, but in truth, it’s more of a political thriller about the succession of the English throne as Elizabeth the First nears the end of her long reign.
The authorship of the plays is almost a side issue, but it does provide us with one of the film’s more colourful characters – the rather odious and selfish self-publicist the literary world has come to revere more than god himself. After a weak show in One Day, Rafe Spall is on top form here, stealing every scene he’s in.
But that’s not because of a weakness of the other key performances – Rhys Ifans is necessarily understated, hiding under his Elizabethan facial hair and eschewing the accent that his become his trademark to fit perfectly into the Tudor era. This is a film about how Edward De Vere sought anonymity, something difficult to achieve for someone with such talent, influence and standing.
Emmerich handles the political intrigue well and the pacing is brisk. He’s not presenting this fantasy as a document of history, and as such, criticising its accuracy seems somewhat churlish. It’s a sumptuous and flamboyant romp – challenging history, certainly, but challenging the political back-stabbing of the Elizabethan court as much as it challenges our understanding of the works of Shakespeare.
With rather too many characters – all looking the same under their Tudor locks – and too much flitting back and forth in time, occasionally leaving us wondering where we are, it’s slightly confusing and intentionally controversial but thoroughly entertaining.