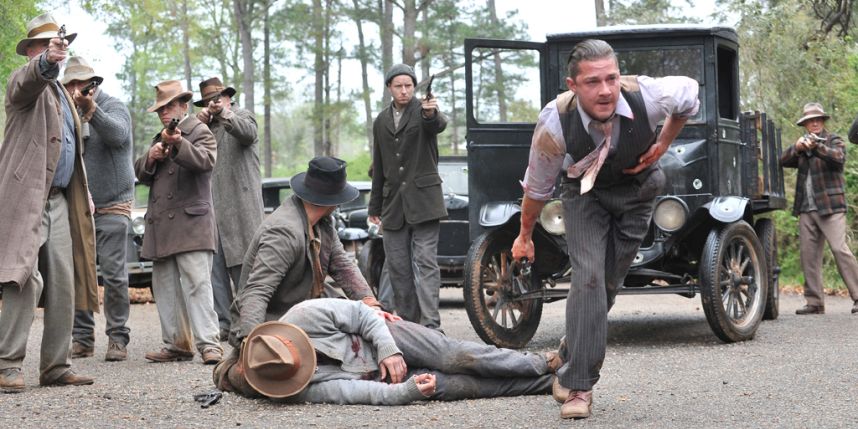 In early 1930s Franklin County, Virginia, prohibition is in full force and the Bondurant Brothers are secretly distilling moonshine and selling it to anyone who’ll buy.

The local authorities take a cut and turn a blind eye; such corruption keeps the wheels of the world spinning smoothly.

But the arrival of a new lawman from the big city, Charlie Rakes (Guy Pearce), throws their operation into doubt. Determined to shut them down, he’ll do everything in his power – from throat-slitting to good, old-fashined fisticuffs – to put the Bondurants out of business, behind bars or in an early grave.

But the brothers believe they’re invincible, as they prepare to fight all the power the law can throw at them.

Director John Hillcoat – working from singer Nick Cave’s screenplay – delivers a realistic but grim picture of Prohibition era America, where the sale of illegal alcohol was as inevitable as the violence and corruption that accompanied it.

We see shootings, beatings, explosions and plenty of blood, but despite the wealth that exchanged hands, all that seems to result is continued rural poverty – it’s enough to make you wonder why people put their lives on the line for little apparent gain.

It’s only Shia LaBoeuf’s Jack who seems determined to enjoy the riches that come their way – of the brothers, his life comes most closely in line with the that of the sartorially fussy lawman that Guy Pearce clearly relishes bringing to the screen; he plays an old-time Hollywood bad guy who grimaces and scowls as he seeks to terrorise and cause as much pain and misery as he can to our protagonists. With his suits, slick hair, snooty nose, Chicago drawl and driving gloves, he looks almost cartoonish enough to belong in a different film, but it’s all the more an enjoyable performance for it.

The film delivers an effective sense of period and the performances are similarly impressive; from Hardy’s brooding, quietly spoken and understated leader to LaBoeuf’s naive optimism and fearless determination.

One problem with films like this, that take elements from gangster and western films, is that it’s hard to find strong roles for women, and while both Jessica Chastain and Mia Wasikowska do what they can with their roles, they don’t have to do much more than cooking, cleaning, tending wounds and looking pretty.

The story is rather simple and linear. Such elements as Chastain’s back story and Gary Oldman’s rival gangster operation are somewhat overlooked, making the narrative largely a cat-and-mouse chase between the mighty feline authorities and the meek family business that seems to be small beer for such determined efforts to bring it down.

At its heart, the film nurtures an interesting moral ambiguity that almost makes you feel dirty watching it. You’re being urged to root for the poor underdog brothers, whose family business is threatened by a sadistic fashionista with passion for blood-letting. But it’s actually the Bondurants themselves who are breaking the law and – while he’s certainly not taking a soft-handed approach – Rakes is just trying to enforce it; unlike the lower-level local lawmen, he isn’t taking back-handers – he’s just delivering them – but not the financial kind.

Lawless effectively illustrates the futility of the policy of Prohibition, which made heroes out of the gangsters who gave the people what they wanted, while making villains of the authorities who tried to enforce the law and reign in the criminals.