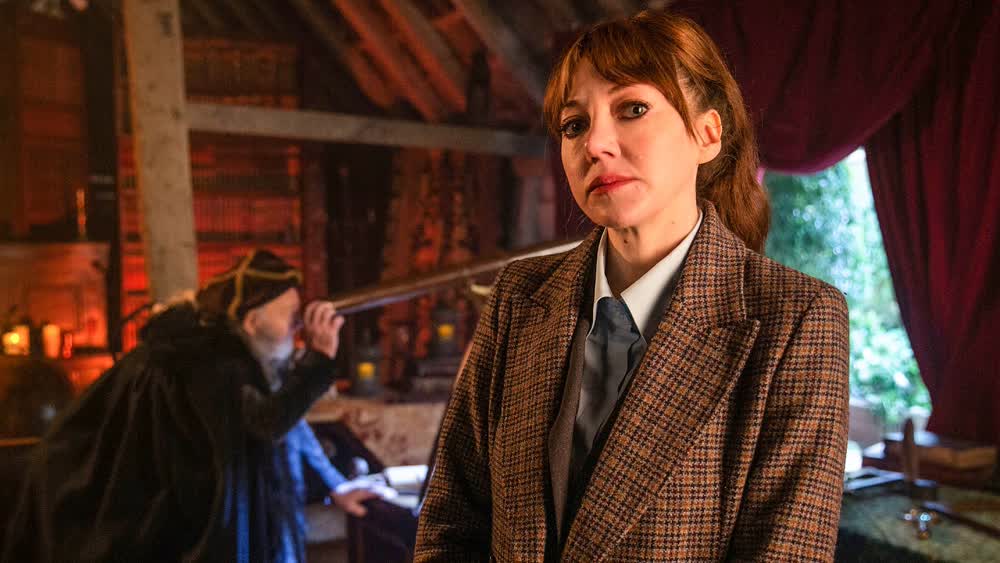 The character of Philomena Cunk (Diane Morgan) began as a talking-head on Charlie Brooker’s Wipe programmes, as a commentator on current affairs, espousing her views and explaining her perception of the world around her – the world around us.

Over the years, Philomena Cunk has expanded her commentary, leading audiences on a journey of discovery through Shakespeare, Christmas and British history; now she turns to her biggest canvas yet – the whole planet – and the whole history of it.

Over five episodes, she turns to experts – genuine experts – to help the audience understand the history, philosophy, science and technology that have made Earth what it is today.

On the surface, this – like all of Philomena Cunk’s programmes – presents as a mockumentary, but unlike most productions adopting that label, it’s not the subject matter that’s mock, but the presenter herself.

Despite her intellectually detached and often uninterested style, you can genuinely learn a lot about the world here, as long as you’re able to sift out the fact from the fantasy.

The quickfire gags come flying from all directions; it’s bursting with satire and not frightened to have a pop at such targets as Vladimir Putin and fundamentalist Islam, much of the humour comes from our host’s apparent misunderstanding of pretty much everything and many of the jokes come from things as simple as playing with language, whether it’s the mispronunciation of common words or clever use of homophones (the Ancient Greeks introducing the world to culture through yoghurt – and theatre, for example).

Unlike Sacha Baron Cohen, who explored similar ground with Ali G and Borat, Philomena Cunk isn’t about embarrassing or mocking authority figures or experts; if anything, it presents some of the most erudite and respected scholars as tremendous sports, as they lower themselves to the often surreal level of her questions, without patronising her – delving into their wealth of knowledge for a simpler way to clarify their point, if she appears not to understand.

It’s possible that much of this is funny only if you know that it’s wrong, which could be seen as a snobbish side-swipe at people who genuinely don’t understand the world around us – but it tends to feel more like we’re on Philomena’s side, learning with her as she tries to unpick the world, than cruelly mocking her. The character has an interesting blend of faux-naivety, earnestness and irresistibly misplaced self-confidence.

The format also enables the makers to have a little side-swipe at the media, as Philomena Cunk breaks down the fourth wall of television. But while many of the gags are highly intellectual, some are a little more in-your-face; some work well, such as a running joke about a 90s techno group, but others leave you rolling your eyes a little.

When it’s at its best, Charlie Brooker and his team deliver some of the sharpest writing in TV comedy, educating viewers about history, politics and science, while providing enlightening social commentary – its both bitingly satirical and surprisingly informative.