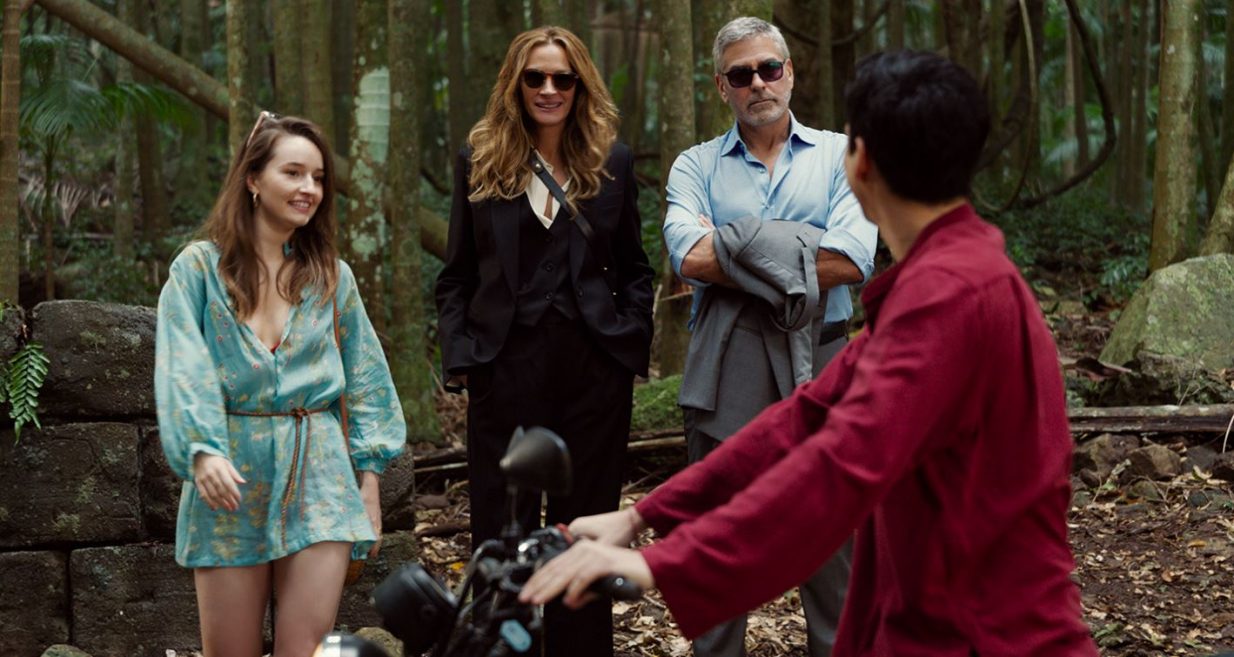 Divorced couple David (George Clooney) and Georgia (Julia Roberts) live as far away from each other as they can and do their best never to meet, so they’re none too pleased when their daughter Lily (Kaitlyn Dever) sits them together at her graduation.

Aside from the expected barbed comments, they get through the event painlessly enough and see Lily and her college room-mate Wren (Billie Lourd) onto a plane for a summer holiday in Bali, before Lily starts her career as a lawyer.

But a month later, David and Georgia find themselves on the same plane, flying out to Bali, when Lily announces that she’s decided to stay on the island to marry a seaweed farmer, Gede (Maxime Bouttier).

Can they stop her making the same mistake they made themselves, twenty five years earlier – or will the stunning scenery and fresh sea air make them reconsider their own enmity?

It’s been a while since George Clooney and Julia Roberts – two of the most bankable Hollywood stars of the 90s and noughties – turned their attention to a full-on romantic comedy and lovers of the genre – and fans of the pair – will get what they want.

It’s a tightly written, warmly presented, gently humorous predictable affair that is never believable but mostly charming and always stunning to look at – the Australian scenery, doubling for Bali, will make you want to run out of the cinema and jump on the next plane down under.

Some of the humour verges on the uncomfortable, as they present a culture clash between the Americans and those zany Indonesians, with their quirky customs. And from time to time, they resort to farce – with characters running between hotel rooms, dropping bundles of clothes.

The mood is uneven and they can’t really decide what they’re trying to do – but they manage to tick all the expected boxes of a romantic comedy; as clunky and obvious as it is, it’s effective…

There are some crucial narrative boxes that are never ticked – we don’t find out why David and Georgia actually hate each other so much – and it’s never really clear quite why they warm to each other again (oh sorry – have I spoiled it for you?) – and why hasn’t Lily invited anyone other than her best friend and her parents to her wedding? You just have to accept that the film-makers are giving us the minimum we need to join them on this sun-soaked, feel-good journey.

At it’s heart, it’s a harmless enough, clever way to target a rom-com at middle aged audiences by casting veterans in age-appropriate roles and adding a touch of 90s nostalgia to milk laughs from generational differences – because drunk young people these days apparently wouldn’t be seen dead jumping around to House of Pain’s Jump Around.

It’s a corny and predictable, box-ticking exercise in story-telling that occasionally sails close to the wind, but bright performances from its accomplished leads (and producers) will keep you engaged and smiling – sometimes, you might be a little embarrassed to catch yourself laughing too.