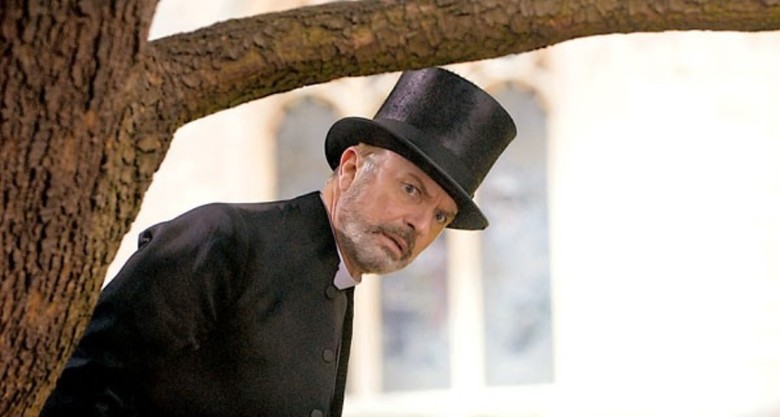 Duty is all that’s there – no love – no interests in common.

Desperate to find something just to get his father out of the house, Fisk Junior decides to take him to a talk by an Indian guru about the subject of the transmigration of the soul – reincarnation, to you and me.

Sitting at the back of the audience is a local clergyman, Dean Spanley (Sam Neill), listening intently – this man of God seems to be oddly intrigued by the concept of past lives.

The subject starts to grow on Fisk Junior too and soon – through the Dean’s love of an obscure liqueur – the pair forge an unlikely friendship – which uncovers an even more unlikely past friendship; without giving too much away, we’re talking about souls crossing species barriers.

This is the kind of film where a brief plot description is more likely to mislead than inform. It’s almost impossible to summarise the story without giving too much away, but without giving anything away, you don’t really get a sense of the story.

So you’ll just have to take my word when I tell you it’s an unusually original film, a story like which you’ll never have seen before, nor even considered in your wildest dreams.

Its U certificate makes it almost unique these days – and it’s even more unusual, in this sense, in that while a complete lack of anything approaching the slightest whiff of sex or violence would in theory make it suitable for children, its talky nature and lofty themes make it about the least appropriate film of the year for an afternoon out with the kids.

After Venus, it was hard to see where the most acting-Oscar-nominated loser Peter O’Toole could go next, but once again he manages to produce a performance at least worthy of further extending this dubious honour.

Jeremy Northam does a perfectly adequate job of being the blank canvas on which the story plays out, although he doesn’t really have much of interest to do.

But it’s Sam Neill who walks away with this film, as his alcohol-induced recollections of a past life are brought to bear over polite dinner-time conversations.

The film is fascinating – the key performances entrancing – but it is, nevertheless, one of the most difficult sells of modern cinema – almost impossible to describe and even more difficult to work out who it’s aimed at.

This is for you if you like a lot of upper class, enigmatic banter that borders on the surreal – and don’t let the U certificate frighten you off – send the kids to see Madagascar 2 in the next screen, while you unravel the drunken mysteries of Dean Spanley’s former life.