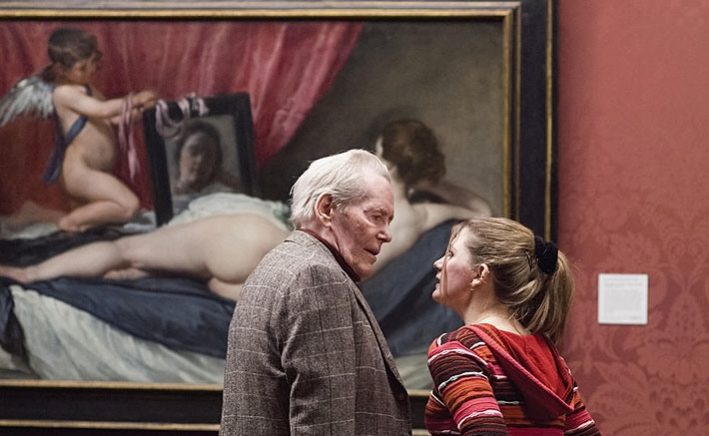 They while away their afternoons in their local café in Kentish Town in northwest London.

The cantankerous Ian is excited about the prospect of the arrival of his new live-in home-help – his great niece Jessie (Jodie Whittaker), coming down to London for the first time.

She is about to liven up their lives – but not in the way any of them might have expected.

Jessie is not the naïve and helpful teenager Ian’s hoping for. Likening her to Little Britain’s Vicky Pollard wouldn’t be far from the mark. She’s loud. She’s brash. She can’t cook. Won’t clean.

She hasn’t come to London to help her geriatric relative, but to help herself – she hopes to pursue her modelling ambitions.

Ian, understandably, hates her. But by showing her a bit of warmth and understanding, Maurice takes a fancy to her and forms an almost inexplicable friendship with her. Separated in age by six decades, Maurice and Jessie start socialising with each other – going shopping, to galleries, just popping round for tea.

For Maurice, spending time with an unspoilt teenager is an elderly man’s wet dream. For Jessie, it makes a change to have someone show her respect and treat her like an adult.

He clearly wants more from the relationship, although like us, knows it’s simply not appropriate. For a little bit of cash, she’ll let him touch her hair, or her shoulder. She sometimes lets him get a little too close – which just makes it even more painful for him when she pulls away, cash in hand.

He’s reliving his youth – while she’s coming of age – but this can’t go on forever: Jessie has a boyfriend, after all, and her boyfriend has other ideas about how she can get the most from the friendship.

This is the second low-budget British film in the past few months that features a relationship – of sorts – with protagonists at least two generations apart. In Driving Lessons, the unbelievably eccentric grande dame of the theatre, Julie Walters, developed an “unlikely friendship” with seventeen year old Rupert Grint. In that case, a cast of grotesques and caricatures made for a laughable mess – the shameful face of British cinema.

Venus, however, is exactly what British cinema needs. It hits the jackpot. The elderly men – with their believable quirks – feel so real – I don’t know any of these actors personally, but you really feel that the cameraman is intruding on a group of friends in the café.

O’Toole’s relationship with the teenager also feels disturbingly and painfully real. It’s so obvious to us – and to Maurice – when he’s pushing it too far – but you’re with him all the way – feeling his pain.

Although slightly less convincing, in a more complex role, newcomer Whittaker has a lot to live up to, surrounded by these guys, but she acquits herself well – giving off a seductive but genuine warmth when she’s with Maurice and scowling when she’s with Ian.

Vanessa Redgrave completes the acting masterclass with her turn as O’Toole’s former belle.

For much of the film, you’ll wish you were up on the screen with them. And there’ll be moments where even those with the strongest of constitutions will be struggling to hold back the tears.