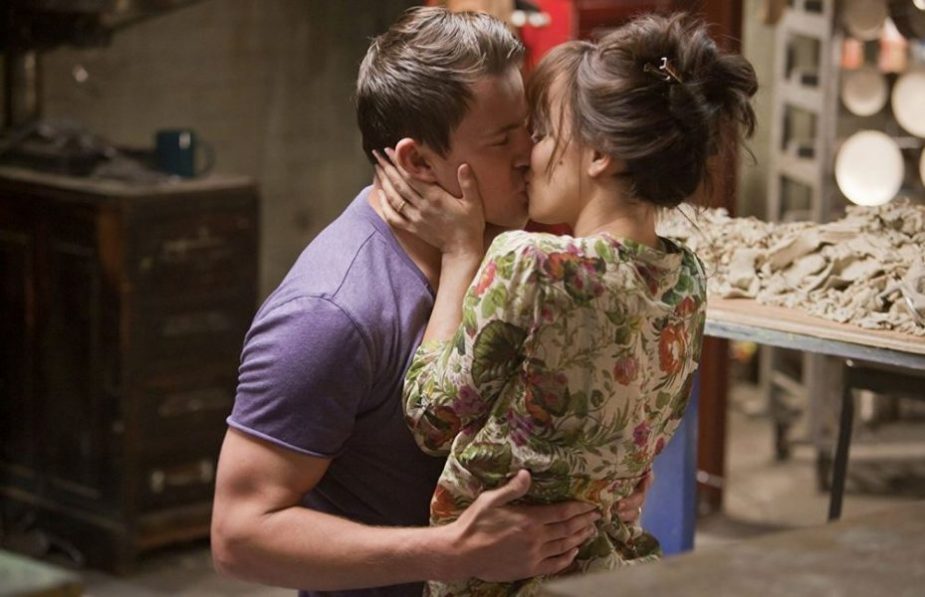 Successful artist Paige (Rachel McAdams) and her music producer husband Leo (Channing Tatum) couldn’t be more in love. It’s the kind of love you see only in the movies. They’re meant for each other.

One snowy night, on the way back from the cinema, they stop at a road junction and as they are kissing, a lorry skids on the ice and careers into the back of their car.

Paige is thrust through the windscreen and is knocked out.

When she wakes up in hospital, with Leo at her bedside, Paige assumes he’s her doctor. She doesn’t remember him at all.

She’s lost four years of her life; the last thing she can remember is living at home in the suburbs with her estranged parents (Sam Neill and Jessica Lange), struggling through law school and engaged to the smarmy Jeremy (Scott Speedman).

But she’s long since left this life behind her, running away from her parents, law school and Jeremy and studying art in the big city, where she met – and fell deeply in love with – Leo. But she has no recollection of any of this.

Leo battles with Paige’s parents over who should look after her. He wants to take her back to their apartment, in the hope it will jog her memory, but for her, this feels like moving in with a stranger. Paige feels more comfortable being back at home with her parents – and in love with Jeremy.

Leo is determined to get back the love of his life, but her father is equally determined to keep her away from Leo and get her through law school.

If they’re meant to be together, will Paige learn to love Leo again? Or will being thrust four years back into her past give Paige the chance to fix what went wrong last time?

The undoubted relief one would feel when a loved one finally wakes up after a serious accident can surely be tempered by only one thing – having that loved one not remember you and prefer to return to a life, long since left behind – a life that doesn’t include you.

The Vow tackles this dilemma with warmth and maturity and Channing Tatum – fresh from playing a Bourne-style agent in Haywire – adapts effectively to the loving husband role.

Although the film necessarily rushes through the couple’s courtship, their love is believable as the pair show us how much they mean to each other. The warmth and devotion shown by Rachel McAdams to the man of her dreams contrasts sharply with the frostiness that replaces it when she can’t remember even meeting her husband.

His pain is never more potent than when, in exasperation, he points out to her that although she’s the one who suffered a head injury, she’s not the only one who’s suffering now.

There are quaint moments, such as when Paige finds herself being bashful in front of her long-time lover and the power struggle between Leo and his in-laws is dramatically effective.

In a film that’s based on, or at least inspired by real events, it’s interesting to see how Leo wants the best for Paige and hopes that it’s also the best for him, whereas her parents want the best for them, regardless of whether it’s also the best for her; selfishly, they see this tragedy as a chance to win back their estranged daughter and have another go at remoulding her – and they see it as an opportunity to write her husband out of her life altogether.

There are times when Leo seems to give in too readily to the demands of his father-in-law, to the extent that you almost wonder whether he wants her back at all and some of the narrative elements feel a little blunt, illogical or obvious – not least the simplistic characterisation of the selfish father-in-law, the smarmy ex-fiance and the meaningless friends from her new life.

The film examines whether skills and memories can be relearned and asks whether our character traits are learned or innate, but its attempts to answer such questions are rather half-hearted and inconsistent, not least because of the unpredictable nature of brain injuries.

The Vow is unquestionably thought provoking and it’s as frustrating for the viewer as it is for the protagonists that brain damage can’t just be cured with a tablet, a quick procedure or a bit of counseling, but ultimately, that makes for an unchallenging drama, as the film’s conclusion is all somewhat in the luck of the gods, so it’s rather unsatisfying to get too emotionally involved.